“The rate hikes proposed last week for implementation next month were mostly in relation to the non-core tradelanes – intra-Asia, transatlantic and South America. Yet, ZIm and APL are still proposing rate hikes on the Asia-Europe (US$350/TEU) and Asia-US West Coast (US$500/FEU) tradelanes, respectively, for implementation in September.

“However, we doubt if the container shipping companies can be successful in the implementation as we believe the peak season for rate hike implementation has already passed,” Bocom said.

The research house added that over the past two weeks, various parties -- including leading container shipping companies and consultants -- revised down the global container volume growth for this year to low single-digits.

Bocom has a 'Sell' call on China Cosco.  Photo: Cosco

Freight rates on the Transpacific (West Coast) and Asia-Europe tradelanes were down 4.7% WoW and 4.3% WoW, respectively.

Load factor on the Asia-Europe tradelane declined to 75% last week, according to SSE.

According to Lloyd’s List, an industry magazine, the idle container vessel tonnage increased by 19.9% WoW to 376,439 TEUs, or 2.34% of the global container capacity as at the end of last week.

“We believe idle tonnage will rise further while the current idle tonnage is still low, in our view,” Bocom said.

The interim reporting season is drawing to a close this week and some of the companies to report this week are expected to see lackluster results for 1H12, according to consensus forecasts.

“We believe investors will inevitably adopt a cautious attitude towards these companies.

“Meanwhile, we do not see any imminent near-term positive industry catalyst,” Bocom said. 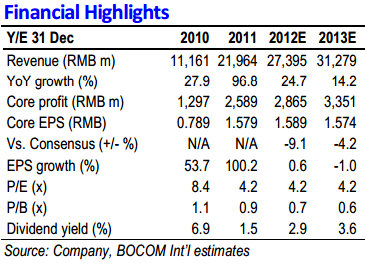 Bocom International said it is raising its call on Greentown China (HK: 3900) to “Neutral” from “Sell.”

“Its earnings are on the right track with positive interim results while earnings surged and net gearing dropped,” Bocom said.

Heavily leveraged Greentown reported a 103% y-o-y jump in net profit to 1.81 billion yuan, attributable to the 38% y-o-y increase in booked sales volume and disposal of projects. 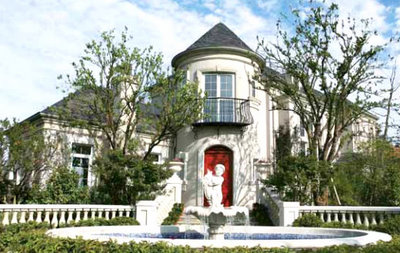 “However, gross margin from booked property sales revenue dropped from 32.6% in 1H11 to 26.5% in 1H12, because the proportion of revenue contribution from villas dropped from 15.2% to 11%, and the company booked low-margin projects in Zhoushan in 1H12, which accounted for 28.5% of total booked revenue but achieved a gross margin of only 18.2%.”

Bocom added that the booking of high-margin projects in Wenzhou in 1H11 did not occur again in 1H12.

Greentown’s net gearing ratio (excluding minority interests) decreased significantly from 220% as at end-FY11 to 131% as at end-1H12, in line with expectations.

“The ratio would probably decline further, given the second tranche of capital injection by Wharf (HK: 4) and cash inflow from Sunac (HK: 1918) for the project stake sales to be completed in 2H12.”

Bocom added that despite the drastic decrease in gearing ratio: “Greentown intends to continue its asset disposal strategy to optimize its payback cycle and strengthen its cash flow position in 2H12, instead of stepping up land purchases to increase leverage.

“Management intends to maintain the net gearing ratio at the current level.

Bocom has a 7 hkd target price on Greentown. 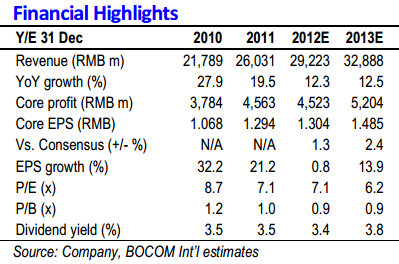 Bocom International said it is maintaining its “Buy” recommendation on Shimao Property (HK: 813) after the developer announced “in-line” interim results.

Meanwhile, turnover rose 12% y-o-y to 13.7 billion yuan, with the decrease in gross margin “causing a drag on earnings.”

“Gross margin dropped from 40.4% in 1H11 to 34.4% in 1H12, slightly lower than our forecast of 35%. It was mainly due to the discounts offered and higher proportion of revenue contribution from 2nd/3rd tier cities,” Bocom said.

Management explained that the effect of price cuts on completed properties sales was booked in 1H12 and caused the decrease in gross margin.

Bocom has a 'Buy' call on Shimao.  Photo: Shimao

“Given the average land cost of RMB1.5k/sqm for its current land bank, compared with its contracted ASP of RMB11.5k/sqm, Shimao is confident in maintaining gross margin at 33-34% in 2H12.”

“Management maintained its prudent strategy that new land will be acquired only if the contracted sales meet the targets of the respective region or segment.

“We think its competitive advantages of improving financial condition and contracted sales momentum could be maintained in 2H12.”

We have 571 guests and one member online