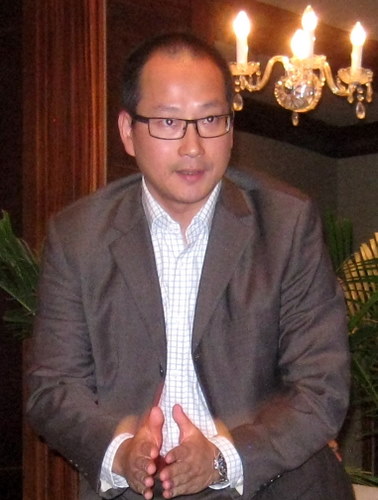 TIANNENG POWER International Ltd (HK: 819), a maker of electric vehicle batteries, is confident it will eat up market share amid a steady drop-off in the number of PRC competitors and tighter environmental and safety regulations, a company executive said.

Even the most casual first-time visitor to Mainland China will not fail to overlook the phenomenal economic vitality of the country and the transportation transformation of its cities.

Unfortunately, the downside effects of so many cars and industries crowding into its streets and suburbs will also be clearly evident as – air pollution.

But Tianneng Power believes it is in an excellent position to benefit from the PRC government’s aggressive campaign to make the air all 1.3 billion Chinese must breathe cleaner and healthier.

Tianneng Power says it will be one of the biggest beneficiaries of Beijing’s drive to reduce air pollution.

As testament to the PRC’s seriousness in pursuing bluer skies – and the huge market opportunities this massive campaign provides – the Hong Kong-based firm currently has all its eggs in the China basket.

“As of now, all of our sales have been in the Mainland China market and all denominated in renminbi. But if and when we expand to US dollar-based exports, we will be thus shielded from currency fluctuations,” said Tianneng Vice President Liu Zhaohui. 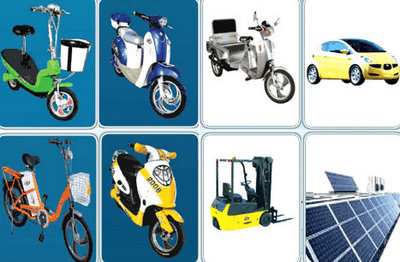 Revenue Drivers: Electric vehicles like these as well as energy storage facilities are eager clients for Tianneng's batteries.
Photos: Tianneng

Speaking at a China Merchants Bank-sponsored investment conference in Shenzhen, Mr. Liu said that one of the most promising developments in the industry for Tianneng was the strong support that China’s central government showed to viable and efficient players in the battery industry – as well as Beijing’s overt willingness to let less efficient or more high-polluting domestic peers fall by the wayside and either be phased out or taken over by more capable rivals.

“The government is actively encouraging a policy whereby domestic battery makers that can’t make the grade are simply allowed to fall. After they are winnowed out of the picture, survivors like us will get a big boost in terms of seeing less product supply in the country, fewer domestic rivals in operation and a stronger, leaner and more sustainable industry into the bargain,” he said.

The manufacturer had an excellent first half, with revenue climbing sharply by 47% year-on-year to over 2.4 bln yuan producing a near doubling of net profit to 201 mln yuan.

Mr. Liu said that during his tenure at Tianneng, he has seen a transformation in the quantity and quality of industry consolidation among China’s battery manufacturers.

“I would say that in the first half of this year, most of the government-encouraged closures were driven by environmental compliance issues. However, in the current half there began to be a lot more market-based failures and shutdowns.”

And with all these low hanging fruits of failed or teetering on-the-brink rivals, with their assembly lines potentially selling at fire sale prices, was Tianneng tempted to significantly boost its production capacity by buying out its bankrupt peers? 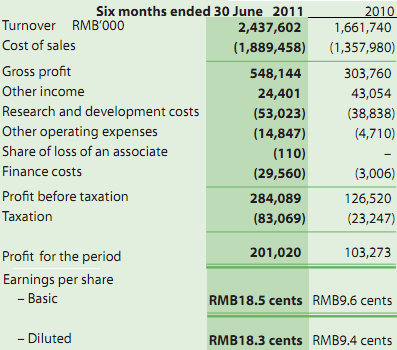 “There is a big risk with acquiring these failed firms. There is a reason they went bust in the first place which is usually related to either outmoded technology and practices or crippling debt – or a combination of the two.

“Therefore, we seldom pursue these types of failed enterprises,” he said.

However, this aversion to buying struggling peers did not mean that the company was turning a blind eye to growth via acquisitions.

“That being said, this is certainly a good time to go bargain shopping for capacity. And I expect next year will be even better,” Mr. Liu added.

Founded a quarter century ago in 1986, Tianneng engages in the production and sale of lead-acid batteries for the PRC electric vehicle market under its own brand name.

The firm said its sales and distribution strategy is to continue engaging exclusive distributors to further expand this market.

By mid-year, there were a total of 890 exclusive distributors, an increase of 57 from 833 as of the end of 2010, with Tianneng’s sales and distribution network covering most parts of China.

Tianneng is also involved in the R&D and sale of recycled batteries, the provision of transportation services and metal materials sales.

Despite its ostensibly wide industry reach, it was still primarily focused on electric vehicle batteries, which Tianneng produced at its three facilities in the Chinese provinces of Zhejiang, Jiangsu and Anhui.

Mr. Liu said that such products currently constituted 92.2% of Tianneng’s operating income and the segment would continue to be its main emphasis going forward.

“In this current fourth quarter, we expect our lead acid battery capacity for electric vehicles to be around 16 million units, and should reach 65 million for full-year 2011, which would be up 30% from last year.

He added that the recycling industry was a major attraction, given its growing profitability and strong government support.

“We’ll begin full production at our new battery recycling plant in the second half of next year. And prices for one of our most important upstream inputs – lead – look to be stabilizing so I don’t expect any more major selling price adjustments over the near term.

“The recycled battery sector will be an increasingly important part of our business.”

BYD Pulling Out Of Auto Biz? Buffett May Too 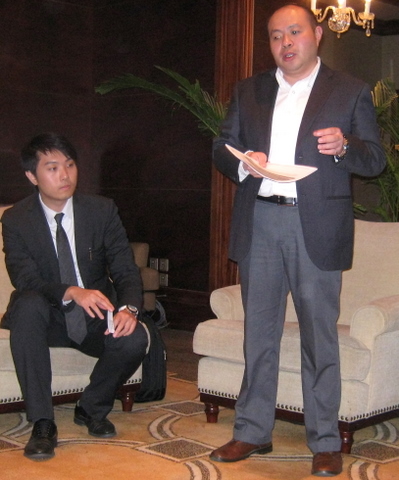 IF CHINASOFT INTERNATIONAL (HK: 354) has its way, India may soon no longer be the sole BRIC (Brazil, Russia, India, China) powerhouse in the global software and information technology services sector.

ChinaSoft, founded in at the start of the new millennia in 2000, develops and sells IT solutions services and engages in IT outsourcing services, both of which for many years now has been virtually the sole domain of India among the fast growing, large economies we often call BRICs – an acronym first coined the year after ChinaSoft’s establishment.

“Ten years ago, there was virtually no outsourcing by foreign software firms in China. But not it is becoming more and more common,” IR Manager Zou Yi told a roomful of investors at a conference in Shenzhen organized by China Merchants Bank.

The Beijing-based firm was right at home in the nation’s capital, ensconced within Zhongguancun, the high-tech zone surrounded by supportive IT-friendly learning institutions like Peking University, Renmin University and Tsinghua University.

“After a decade of efforts, we have completed the initial overall layout in our vertical industries and technology services. We expect that we will enter a new round of rapid growth,” Mr. Zou said.

Next Microsoft... from China?

ChinaSoft was also hitching its wagon to IT and mobile technology software in a big way. 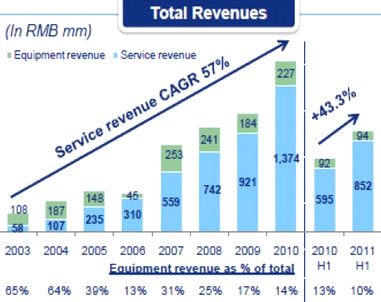 ChinaSoft has a contract with China Mobile for mobile payment systems following an earlier successful tieup with Shanghai Mobile for "phone wallet" operations.

“Every time you use your bank card in China, there’s a good chance that our software makes the transactions possible. And we are also developing POS (point of sale) software that makes cards and even cellphones double as mobile pay devices in retail outlets, subways, buses and countless other POS venues.”

On the service side, ChinaSoft also provides business process outsourcing services such as data processing, desk top publishing, production and work design as well as call center services – the latter long being associated with helping employ Indians by the hundreds of thousands. 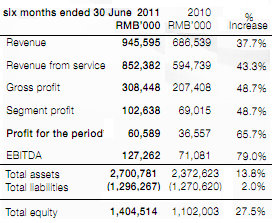 “Our clients are from all variety of industries, including financial services, manufacturing and distribution, telecommunication, transport and logistics, information technology, insurance, education, and healthcare, as well as government, and we have operations in the PRC, Hong Kong, the US and Japan.”

He said China’s government and its numerous layers of organizations continued to be key clients for its software and IT services.

“As a major provider of IT and telecom services to the Chinese government, we are deeply involved in the national e-gov construction process. Over the years, based on our industry experience and ResourceOne division – our proprietary application middleware platform software – we have achieved outstanding results.”

He said that as a rising power in IT innovation – especially in the easily “shared” sub-sector of software development, China was working to instill a greater respect for intellectual property rights in a country that has often been criticized for doing little on the enforcement side.

“IPR is a process, not an event. We want to offer better services so we naturally respect IPR and we hope everyone else will come to do so as well,” Mr. Zou said.

He also was very bullish on China's chances of producing the next global powerhouse brand in software.

"China is already a global leader in many areas of technology hardware. Perhaps the next Microsoft will come from China as well."

We have 654 guests and no members online