STOCKWHIZ COMPETITION: > 100% gain in 1 or 2 days with prudent investing?

This article is reproduced with permission from www.martinlee.sg, a blog focusing on financial matters in Singapore.

THE StockWhiz competition organized by SGX and SIAS almost came to an ominous end when it started last week.

After just a day or two of the 2-month plus competition, the top performers looked something like this (see screenshot at the bottom right).

These were results that would probably put the best traders in the world to shame. It would also put an end to the hopes of all the rest of the contestants.

So what was their secret to doing so well when the movement of the biggest gainer that day was nowhere near?

I have actually signed up for the contest too and have yet to initiate any trades but it didn’t take me long to roughly figure out what they did. 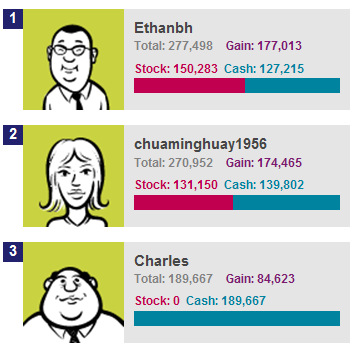 Screenshot from https://www.sgxstockwhiz.com/sgx/ These three 'traders' are leading the pack with astronomical gains of more than S$84K in just a couple of days of the competition.

Before I explain what actually happened, let’s look at the objectives of the contest (as given by the organizers):

StockWhiz is an SGX initiative aimed at educating retail investors on prudent investing. Participants can use StockWhiz to learn about creating a diversified portfolio through the tools and research available on My Gateway (http://www.sgx.com/mygateway) and enjoy the learning journey in StockWhiz.

Which I actually find quite ironic because in order to win a 2-month competition, you will probably need to take on excessive risk using a trading strategy to try to beat all the other competitors. Now, I wouldn’t call that prudent investing.

Back to what actually happened.

The thing about a virtual stock market competition is that the volume of trades might not be reflective of the actual market. Thus, it is very easy to move prices in the virtual market by placing trades in the real market if one selects the correct stock.

The ideal target would be those stocks trading at 1 or 2 cents with almost zero liquidity. So, you have a few smart people who figured that out very early on and went on to produce astronomical kind of returns.

Yes, rigging takes place even in a competition!

After numerous complaints (which you can see on Facebook), the rules were amended. One of the change was to remove shares that costs less than $0.20 and void all the transactions of those counters. This removes one of the loophole of the competition.

I had a chuckle when I read one of the replies given by the organizers of StockWhiz :

StockWhiz was launched on 10 September as an initiative to educate retail investors on stock investing as part of a diversified and prudent approach towards preserving savings.

However, we have noticed that some StockWhiz participants have adopted a strategy of frequent transactions on short-term price movements with an undiversified portfolio. Such a trading strategy carries high risks and is not representative of the prudent investing approach investors should embrace.

With this in mind and also following feedback from participants, we are enhancing StockWhiz and ensuring that it mimics more closely the workings of the actual market.

I don’t think a 2-month long competition is the right tool to educate investors on diversified and prudent investing. And other than a major rules overhaul, there’s no way you can deter frequent trading in such a competition.

RIGHTS ISSUES: How to deal with them

0 #5 Making sense 2012-09-23 09:47
Of course any competition in a defined space of time attracts gamers. The removal of penny stocks and now less liquid stocks reduces this feature which is part of virtual gaming. There is nothing to stop virtual speculators from taking big punts in making and loosing big, but even looking at the top 20 in various categories, it is obvious that the vast majority offoljs are just using the tools, screeners etc to enjoy a risk free learning experience. Apart from top returns, there are also orher price categories for duversification etc.easy to critique,but seriously only a few chaps who try to create unrealistic retuns in virtual world are doing this and keep getting reset!
Quote
0 #4 845 2012-09-21 13:59
Since there are extreme winners, there would be extreme losers, right? People who lost almost everything in a matter of days through fierce risk-taking. How to find that out?
Quote
0 #3 RegularJoe 2012-09-21 08:02
im guessing your theory might be floored as the prices are pararell to the actual market, and therefore prices cant be rigged.
Quote
0 #2 radiantforce 2012-09-21 05:56
back when yahoo finance ran a similar competition, the winners made 100x fold. its hard for organisers to really teach true investing when:

1. the time frame is limited, which makes stuff like value investing and fundamentals go out of the window. just pure trade
2. there's monetary incentive with no real loss to the participant. I'd gamble and try my luck also

congrats to ethan on leading the pack though, he s at almost +500k today. this is after all a game with different rules from real world investing and he managed to spot it and use it to his advantage. he did well in the game so far, so no credit should be taken away from him.
Quote
0 #1 Felix 2012-09-21 05:42
What message SGX sending out to the market participants and the listed companes/.

Are they saying that investing in company shares that are less than 20cents,is not called are not investing , but speculating??

We have 1324 guests and no members online