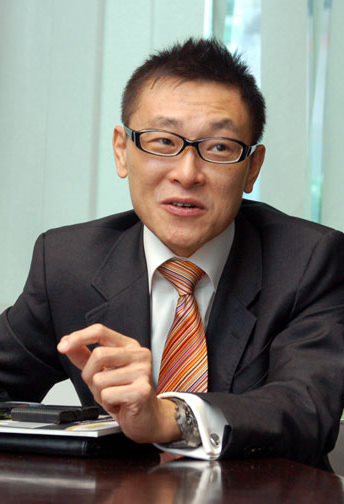 PJ Wong, co-founder, chairman & CEO of Focus Media, which listed on the Growth Enterprise Market of the HK Stock Exchange in July this year. Photo by Sim Kih

EVEN IN ordinary times, getting a SME listed at 20x historical earnings would be some achievement.

Focus Media Network has just achieved that lofty valuation in the strongly bearish market of recent months. It did so on the GEM board of the Hong Kong stock exchange – and it’s noteworthy that the co-founder, chairman and CEO is a Singaporean.

PJ Wong is 46, and is the only Singaporean to have started and publicly-listed a media company in Hong Kong.

It has been a long time since he flew on a one-way ticket from Singapore with a couple of hundred (Singapore) dollars borrowed from his brother to pursue his calling to become an entrepreneur in one of the most competitive business arena in the world.

Up to that point in 1990, the key events in his life had not foreshadowed the entrepreneurial success nor the substantially higher material wealth that he would achieve.

After all, he had stopped schooling after his 0-level (having failed miserably in his second language, Mandarin) an event that would have led to a less-than-glittering career for most people with such a start in life.

PJ had always been attracted to the uniform -- He had been very active with the Boys’ Brigade and was one of the youngest recipients of its Founder’s Badge, the highest award attainable.

After school, he signed up full time with the Singapore Armed Forces for six years. When it was time to leave, PJ had already realized where his talent  lies: sales.

And he wanted to challenge himself by selling the "most intangible service", by being an advertising salesman with a local publishing firm. It's a career move that set him on the road to the world of TICE (Technology, Information, Communications & Entertainment) for the decades ahead.

After a year, hungry to improve his lot in life, he was on the way to Hong Kong – and would rise rapidly in his career and jet-set to cities across Asia.

He had to overcome an inauspicious start first, though.

In 1990, the Gulf War was casting a pall on the economy and job opportunities had become scarce. With no friends or relatives in Hong Kong and surviving on a shoestring budget – which initially meant a daily diet of bread and plain water – he found work only after a month.

This was with a start-up regional satellite TV network, Star TV, founded by Richard Li, the son of Hong Kong billionaire Li Ka Shing. PJ became the first Singaporean to join the pan-Asian satellite broadcasting industry and became a pioneer in one of the most major media revolutions across the Asia Pacific region.

“I sold the first MTV ad,” PJ recalls. PJ went on to launch MTV Asia in a number of Southeast Asian cities, including Singapore. Within the sales division, PJ had become the top performer and was starting to be noticed by the network’s founders.

“As I had sales experience in Singapore, I was given the Southeast Asia territory. Not many of us really knew what we were doing and nobody had thought these small markets would soon turn out to be one of the highest growth regions in satellite broadcast television. I was at the right place and the right time and I just kept on working, it was the best job of my entire career."

Not that selling advertisements for satellite TV was a piece of cake. After all, countries like Singapore could not receive satellite TV then.

In 1993, at the age of 28, he became Star TV’s youngest regional director and went on to establish the network’s first regional office outside of Hong Kong and became the second regional satellite broadcaster (after HBO) to establish operations in Singapore, while retaining his responsibilities for Southeast Asia. 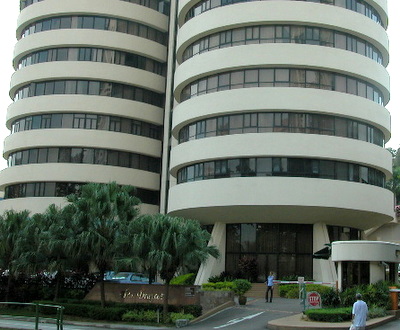 The Draycott: After PJ sold his first home there for a profit, he bought numerous other properties in the ensuing years.
Photo: Internet

He could now afford his first property – a S$800,000 apartment in the high-end Draycott Park, off Stevens Road. (As we know, property prices in Singapore have climbed, and PJ's subsequent sale of his property provided the capital for his purchase of numerous other properties in the ensuing years.)

Shortly after, News Corp bought Star TV for US$1 billion. After staying on with the new owner for a year, PJ was invited to rejoin Richard Li and became a founding member of Pacific Century Group's first venture, Corporate Access, the first and largest pan-Asia provider of satellite-based corporate communications services.

The company was subsequently acquired by Hutchison Whampoa for US$75 million, as a result of which PJ was transferred to Hutchison Telecommunications where he became its Vice President for sales & marketing and business development.

Year 1997 was one with personal milestones: he got married (to a colleague) and he decided it was time to pursue his entrepreneur dream. He launched a boutique venture capital firm with a focus on transporting western technologies to Asian markets.

However, the advent of the Asian financial crisis very soon after put paid to his venture. Knowing that Asia would take a while to recover, he casted his eyes on the other side of the globe - specifically, Silicon Valley.

There, he quickly found a job with Loral Space & Communications' Globalstar, a constellation of 52 satellites that provides the next-generation mobile satellite communication services in more than 100 countries.

As its founding Regional Director for Asia, he led Globalstar to establish its Asia Pacific head office in Hong Kong, and was responsible for its investment and partnership development with the region’s leading telecommunications operators.

"Of all the companies based out in the Valley at that time, I joined a defense company. If it was any of the three-horsemen - Yahoo, eBay and Amazon - my life would be quite different today”. PJ mused.

Taking the plunge during Internet craze 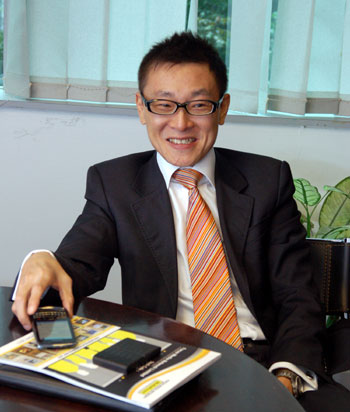 The Internet boom was developing at that time, and the stock market was euphoric. Many investors soon became rich. “I made some wise decisions buying Internet stocks, including the three-horsemen, they just kept going up.”

Convinced that the Internet is a once-in-a-lifetime opportunity that could make him a billionaire, in May 1999, he became founding Managing Director of 24/7 Media Asia, one of three business units of Chinadotcom.

Chinadotcom would shortly go on to become the first pan-Asia Internet venture to be listed on NASDAQ and it would achieve a market cap exceeding US$6 billion.

Having successfully built the online sales network to deliver more than 40% of Chinadotcom’s revenue within its first year of operations, PJ was confident the moment he had waited for in his entire career had arrived: He left behind lucrative stock options to pursue his entrepreneurial calling.

In 2000, PJ founded AdSociety.com with Richard Li’s PCCW ("Richard is one of the most industrious people I have known"), which quickly became one of the most high profile pan-Asia Internet ventures with a valuation of US$260 million during its last round of funding. 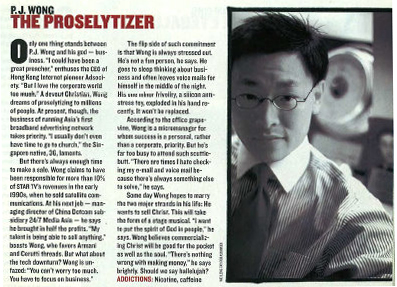 In an edition of AsiaWeek magazine in May 2001, PJ was featured along with Sabeer Bhatia (Hotmail’s founder), Jeffrey Khoo Jr (Chinatrust), William Deng (Netease founder) and James Murdoch (News Corp) as one of 25 Young, Wired and Rich Asians who were shaking up the region's business establishment.

Working with colleagues based in offices across nine major cities (again including Singapore), and with numerous sales and technology partners in the US and Europe, PJ established a global advertising sales network.

It spanned 28 cities and provided integrated online, broadband and mobile advertising, marketing and sales services to over 2,000 premium media properties - all within its first year of operations.

In its second year, it was about ready for its IPO when the Internet bubble burst and the Sept 11 terrorist attacks befell the US.

The venture’s controlling shareholder, PCCW, restructured the ventureʹs shareholding and operations, ending the venture and shattering PJ’s dreams. It almost brought him into depression.

The venture’s business that was given away to companies that didn’t shut continues to grow and these companies would eventually go on to be publicly-listed or be acquired by publicly-listed companies. One major lesson that PJ took away from the entire experience – “be your own lawyer and understand contracts before signing it. Today, lawyers refuse to believe when I tell them I am not legally trained,” PJ said.

Shortly after, PJ was again invited to rejoin Richard Li at PCCW, this time (fourth time running) to serve as the CEO of its NOW Satellite TV, a pan-Asian satellite television channel dedicated to sports, video games, music and science & technology.

We have 244 guests and no members online