Market Slide Continues, but Positives May Be on the Horizon

IN OUR VIEW, markets have overly discounted the downside economic risks and have the potential for improved performance in the months ahead.

We would peg the risk of a US recession at somewhere around 30% (lower than what stocks are pricing in) and would note that equities remain attractive due to a combination of strong corporate balance sheets, solid valuations and overly negative sentiment.

The situation in Europe remains our key concern, and some sort of stabilization in that region would go a long way toward setting the stage for improved equity market performance.

Our overall view is that it would likely take some sort of exogenous shock or serious policy mistake to drive the United States into a recession. The clearest risk to the entire global economy is, of course, the worsening debt situation in Europe. Conditions have deteriorated over the past several weeks, and the risks are growing that we could see some sort of European bank failure or nationalization, a widespread European recession or some sort of breakdown of the euro. 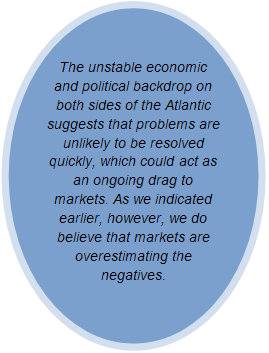 Any of these would be a negative for global growth and would raise the risk of a US recession. As in the United States, the political backdrop in Europe is making it difficult to forecast policy actions, but some sort of combination of European interest rate cuts, increased bond buying, guarantees for bank borrowers and/or the creation of a eurozone bond would be helpful.

From an investment perspective, the primary question today is whether stocks have already fallen enough to discount all of these risks or whether markets are poised to fall further.

The unstable economic and political backdrop on both sides of the Atlantic suggests that problems are unlikely to be resolved quickly, which could act as an ongoing drag to markets. As we indicated earlier, however, we do believe that markets are overestimating the negatives.

In our view, we are in the midst of a bear market in confidence more than anything else and investors should be on the lookout for signs that conditions will be getting better. There are a number of developments that could help restore confidence which could help the markets regain traction.

Our list includes: positive surprises in US economic data; lower interest rates in Europe; major European bond purchases; a eurobond issue; additional quantitative easing from the US Federal Reserve; the US Congressional “super committee” agreeing to major long-term entitlement reform; and US pro-growth tax policies that encourage capital formation. In our view the items earlier in the list are more likely than the latter.

We have 2518 guests and no members online