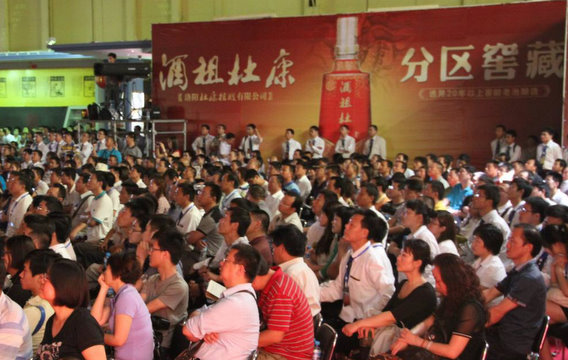 Dukang's May trade fair attracted more than 1,500 participants. Dukang signed on 60 new distributors, half of whom will sell the Dukang baijiu outside of Dukang's home province of Henan. Photo: Dukang

FOLLOWING OUR recent introduction article (see URL at bottom of the page) on Dukang Distillers, we attended a presentation by the management yesterday at CIMB. The speakers were Jason Chan, its financial controller, and Ngo Yit Sung, its investor relations manager.

Here are 3 key growth drivers to look out for:

Jiuzu Dukang, a new premium series selling for RMB100 to more than RMB500 for each 500 ml bottle.. Photo: Dukang.

In May 2010, Dukang Distillers, a producer of baijiu (Chinese white wine) products based in Henan province, acquired Luoyang Dukang half of whose 2,968 fermentation pools were not in use.

Dukang Distillers has gone about reviving the pools using part of the RMB270 million raised through its TDR-listing in March 2011.

The revival process would be completed by this month, and positions Luoyang Dukang to achieve its maximum production capacity of 7,610 tonnes a year.

With that, Luoyang Dukang is set to become a formidable contributor to the Group.

This percentage is clearly set to grow, unlike the other brand that Dukang sells, Siwu, whose maximum production capacity is almost reached.

Siwu is for the mass and mid-end segments of the market.

By the way, the 3Q revenue of Luoyang Dukang is not to be taken as typical of other quarters because 2Q and 3Q (straddling Sept to March of Dukang’s financial year ending June) are the high seasons owing to winter, end-of-year holidays and Lunar New Year celebrations.

The other growth driver is potentially a partnership with a leading Taiwanese liquor corporation which would produce baijiu products under an OEM arrangement.

The baijiu would be sold in Taiwan and the the PRC under the Dukang brand name.

This partnership could be sealed in two or three months’ time and production of the baijiu would start by year-end, according to Mr Ngo.

Luoyang Dukang is not only a significant revenue contributor but also a reason for its expanding gross profit margin.

The average selling price of the premium Luoyang Dukang baijiu rose 16.8% to RMB182.6 per kg in 3Q compared to the 2Q.

At its annual fair last month, Dukang signed on more than 60 new distributors, a significant addition to the network that now numbers 170.

What’s also significant is that more than half of the new distributors were from outside of Dukang Distiller’s home province of Henan. This positions the Group to capture new sales in other parts of the country.

We have 685 guests and no members online