Furnishing company Passion Holdings has just received a privatisation offer from a strategic investor which was 23.8% above its last traded price.

Not exciting enough? How about engineering firm PNE Micron? Its share price hit an intraday high of 114% above its last price after the company announced its RTO plan two days ago.

Slightly more than three months ago, Contel also announced an RTO deal that sent its share price up by 33% the following day.

While it is harder to identify a company with RTO potential, we recognise that it might be easier to sieve out firms with privatisation potential. A natural set of criteria would be low price‐to‐book ratio and strong balance sheet with plenty of cash.

A high level of single shareholder’s controlling stake also makes it easier for the acquirers. Screening through the SGX‐listed stocks, we list some companies which meet the quantitative criteria.


Recent story: S-CHIPS: Which are next possible privatisation candidates?

Tapping on China's water industry. United Envirotech Ltd (UEL), one of the leading membrane-based waste-water treatment companies listed on the SGX, currently operates five water treatment plants in China with a total design capacity of some 385k m3/day; it is also in the process of constructing another two plants with a total design capacity of 130k m3/day, which should start contributing to its recurring treatment revenue from Apr 2011. 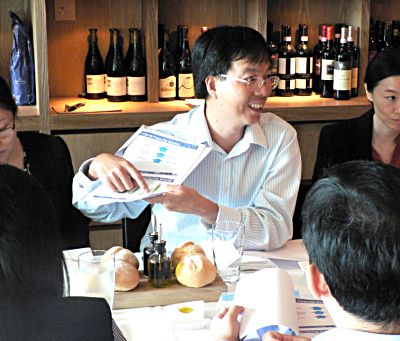 On the engineering side, we estimate that the group is currently sitting on an order book of S$120m, which it will deliver and recognize within 2011. And the group is not resting on its laurels as it is currently hunting for more EPC contracts as well as looking for existing TOT (Transfer-Operate-Transfer) plants (usually able to generate revenue immediately) to add to its investment portfolio.

Applying the same 12.5x valuation that CWI is paying for STL to UEL's FY11F EPS, this would translate to a price of around S$0.47. However, as UEL has slightly better quality waste-water treatment assets in its portfolio, we think that our DCF-based fair value of S$0.65 (14.4x FY11F) is justified. Maintain BUY. 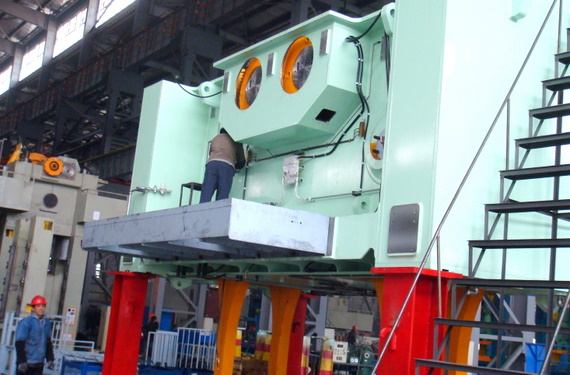 Bright World's stamping machines are sold to customers in various industries for use in manufacturing metal components such as car bonnets and railway parts. Photo: Bright World


Recent development: The company recently announced a strong set of FY10 results with net profit more than doubling to RMB125.0m. Turnover also saw an increase, by 85.2% YoY, to a record RMB1,038.6m, thanks to a shift in product mix towards high-performance and high-tonnage stamping machines. A final dividend of RMB0.119 per share was declared, translating to a yield of 4.0%.

Jumping on the bandwagon. Bright World has successfully secured its first contract to supply machinery used to make high-speed trains in China last year. We do not think the recent removal of Liu Zhijun as Minister of Railways would derail the industry’s longer-term prospects. Management expects about 10% of group revenue to come from the locomotive segment in the next 1-2 years.

Valuation justified by earnings growth.Underpinned by a buoyant orderbook of RMB270m, the company is confident it can achieve at least 40% sales growth in 2011. Valuation-wise, the stock currently trades at about 9.7x FY10 PER. 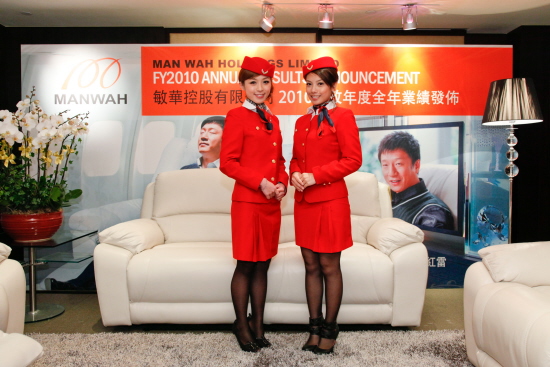 Since its delisting from Singapore Exchange, Man Wah shares have done well on the HK bourse where they were re-listed. The stock is up 33% in the past 6 months and has a market cap of HK$12.3 billion. Photo: Company

We expect Man Wah to deliver an FY10-13 net profit CAGR of 28%, driven by rising recliner-sofa sales volumes as the company expands its annual production capacity. While we expect gross and net profit margins to remain at relatively high levels, we believe they will moderately decline in FY11-13 due to rising raw material, labour and advertising costs.

Likely to benefit from a number of drivers

We believe Man Wah will benefit from: 1) the rising spending power of Chinese consumers; 2) increased China property transaction volumes in the medium term boosting demand; 3) further development of its business relationship with China Railway High-Speed (CRH) to supply seating and other fittings for CRH trains; and 4) brand enhancement.

Valuation: initiate coverage with a Buy rating and PT of HK$16.00

We derive our price target from a DCF-based methodology and explicitly forecast long-term valuation drivers using UBS’s VCAM tool. We assume 8.38% WACC, and use 1.16x beta. Our price target implies 16.1x FY12E PE and we believe Man Wah can re-rate from the current levels given its net cash position, high earnings growth potential and ROE.

We have 669 guests and no members online