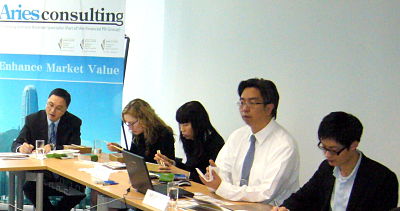 And at a recent Aries Consulting-sponsored event, the company’s CFO listed several reasons why the Hong Kong-listed steel pipe manufacturer’s shares are a bargain.

Despite a challenging year on the earnings front, the Guangzhou-based firm was confident that a combination of new order realization and expanding market opportunities in different sectors such as construction, telecommunications and transportation would bring significantly better results going forward.

“This year has been a little bumpy,” Chu Kong CFO Mr. Albert Hu told a gathering of investors and media in Hong Kong.

“But we see the CNOOC project in Zhuhai (south China) as a big opportunity.”

He was referring to CNOOC’s planned 300,000 ton capacity gas project in the Guangdong Province-based city which is still awaiting approval from the National Development and Reform Commission (NDRC). 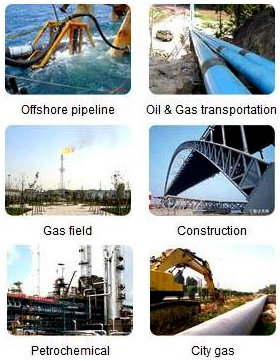 Once the expected approval is granted, Mr. Hu was confident that Chu Kong would be in an excellent position to win a significant portion of the mega-contract.

“We are also seeing lots of opportunities next year in South America, Australia – especially for LNG (liquefied natural gas) – and in Central Asia, notably Kazakhstan and Turkmenistan. Also, in Oman, we hope a major project deal of ours can be finalized in 2011 which would be one of our biggest orders ever. And we are eyeing a major pipeline project in the UAE,” he said.

“Nigeria is also showing a significant uptick in demand.”

However, it was the domestic PRC market that was the real breadwinner for Chu Kong, as Mainland China contributed 51% to sales in 2009 but the ratio jumped to 69% in 2010.

“The financial crisis in Europe impaired global market confidence in the first half which slowed down global infrastructure projects including pipeline projects,” Mr. Hu said.

The was the main reason for a number of export contracts having yet to be materialized during the January-June period which led to revenue from overseas sales falling 57.8% year-on-year to 264.6 mln yuan.

“Tightening measures implemented by the Chinese government to curb spending hit the domestic market which resulted in a delay of a number of pipeline construction projects in the PRC.

“However, revenue from domestic sales was in line with that of 1H2009, and despite orders from CNPC and Sinopec being affected, orders from CNOOC recorded encouraging growth,” Mr. Hu said. 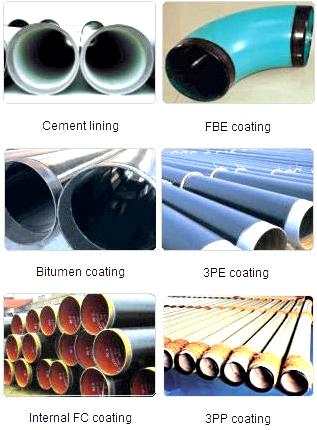 The company was always looking to move up the technology chain and offer a wider variety of high-tech, high-margin steel pipe products to meet growing demand from increasingly complex sectors.

And deep sea LSAW (Longitudinal Submerged Arc Welded) steel pipes were one of the most promising new areas of growth potential.

“In May, we successfully developed deep sea LSAW steel pipes, with a diameter of 559 mm and a wall thickness of 28 mm, becoming the first steel pipe manufacturer to have developed such pipes,” he said.

And with China’s insatiable thirst for new energy reserves to fuel its juggernaut economy, Chu Kong is hungrily eyeing a surge in domestic orders.

“With offshore oil and gas exploitation becoming the market focus, this product will be the future growth driver, and we expect to receive orders in the current half.”

However, I asked Mr. Hu if Chu Kong’s steel pipes were only destined to transport petroleum and natural gas, or if other applications were economically feasible, including in a supportive architecture role.

“China’s ‘Smart Grid’ which will control the country’s energy and telecommunications needs will require four mln tons of steel pipes per year over the next several years for control tower construction. So we see this as a huge opportunity for us.”

We have 1012 guests and no members online