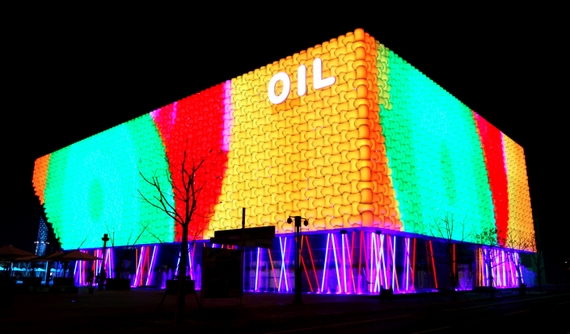 Bigger Audience: The record 70 mln plus visitors to the Shanghai World Fair were able to visit this pavillion which received major design assistance from Pico. Photo: Pico

PICO FAR EAST Holdings Ltd (HK: 752), a provider of exhibition and event marketing services, is hitching its wagon to the fast-growing PRC market and expects the world’s most populous country to take center stage in driving future growth.

And after a record half-year earnings period, the Hong Kong-listed firm’s chairman (left) is looking to Mainland China’s growing need for exhibition services and A&P activities to provide windfall opportunities. 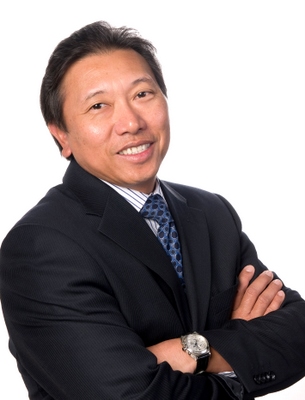 In the financial half year ending in April, Pico’s net profit jumped to 81.2 mln hkd from 60.4 mln a year earlier, and the company is scheduled to announce its FY2010 results on December 20.

NextInsight: What is the most concrete guidance you are prepared to give at this point?

Mr. Chia: Pico managed to sustain strong growth into 1HFY10 with recorded turnover. One half of the turnover related to our work at the Shanghai World Expo has been recognized in 1HFY10, so the rest of the associated revenue will be recognized in the FY2010 financial report. And we have recorded a CARG of 6.7% over the past five years.

Revenue streams from major events will continue to be realized in FY2011. The year will again be teeming with mega-events which just as in FY2010 helped Pico stage strong earnings. To name a few, some of the recent events which we participated in include the New Delhi Commonwealth Games, Macau Cotai projects, Oman Beach Games, Barcelona International Textile Machinery Exhibition and the just concluded Guangzhou Asia Games.

The above listed project pipeline in FY2010/2011 will generate a strong operating cash flow. As of April 30, 2010, the total balance of cash and bank deposits was over 708 mln hkd. Growth prospects beyond FY2010 are promising given Pico’s expertise and experience in managing exhibitions and mega events.

The Greater China region is proving successful and continues to be the future growth driver. The Mainland China market is the key current growth driver of Pico given the huge demand for exhibition services and A&P activities.

The current breakdown by geographical segment for Pico is 60% from Greater China and 40% from the rest of the world, with India set to be the next growth driver.

Pico has long-term relationships with major MNC customers (mostly in Asia) who contribute over 80% of our recurrent revenue.

Pico has set up an office in New Delhi and will expand to other major cities including Mumbai, Bangalore and Chennai. India will be a new source of growth. 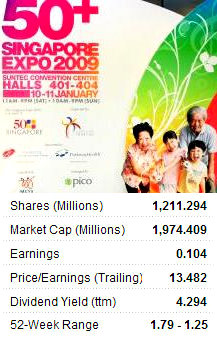 Your P/E ratio is still relatively low at 13x. What is it about your company that owners of your Hong Kong shares don’t know about Pico, and is therefore keeping them from realizing the true value of your firm?

Mr. Chia: Pico specializes in exhibitions and events as well as other distinct businesses including museums, theme parks, interiors, brand signage, conferences and show management, as well as exhibition hall management worldwide. We are well-positioned to capture the booming exhibition and trade show businesses in China, India and the Asian region.

Pico has always had a strong and firm presence in Asia, including Hong Kong. Over the years, Pico has participated in various projects in Hong Kong, and one of the most outstanding and well-known projects was the Beijing Olympics Equestrian Events, East Asian Games, Ocean Park and Hong Kong Disneyland, which fortified our reputation in Hong Kong.

Pico is well known for its expertise in handling mass scale events and exhibitions, especially in MICE, and Hong Kong’s improved image as a prestigious conference and exhibition location will continue to attract more local, regional and international world-renowned events which in turn will continue to benefit the company’s ongoing expansion and leadership position in the field. 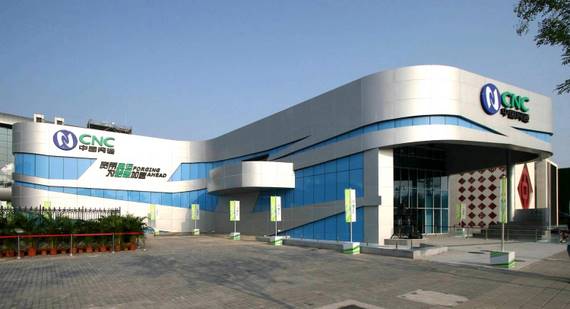 Among trade shows, entertainment events or sporting activities, which is the largest contributor to your revenue currently, how do their margins compare, and which is the fastest growing segment for Pico in China recently.

Mr. Chia: The China market is the key growth driver given the huge demand for exhibition services and A&P activities.

Among the four business segments of Pico, “Exhibition and Event Marketing Services” accounted for turnover of 1.2 bln hkd in the first half, contributed more than 80% of total turnover.

The group’s comparatively lower gross margins in 1H2010 is attributable to the World Expo’s project cost of sales, which included all direct overhead pertaining to this project. But these financial expenses are one-off and should not impact on our future growth performance.

To celebrate Singapore's 42nd birthday, a parade themed "City of Possibilities" was held in Marina Bay for the first time. The Pico-designed and run stage set was situated on the largest floating platform in the world. It transformed the new downtown into a bay of celebrations where people watched the parade from various vantage points along the waterfront. Photo: Pico

How involved is Pico in the 2010 Guangzhou Asian Games, how successful were the 2008 Olympics and Shanghai World Expo, and what have you learned about the changing Chinese consumer and sports fan/Expo fan by working these three events?

Mr. Chia: Pico has secured over 20 mln yuan worth of projects for the 2010 Guangzhou Asian Games.

Our involvement with the 2010 Shanghai World Expo was a success and 50% of the turnover related to this project has been recognized in 1H2010. The event was a great platform for countries and corporate pavilions to attract visitors and served as a good business opportunity for exhibition and event-related activities.

It definitely had an impact on Chinese consumers. Organizing large scale events has a great impact on the social well-being of a country.

Take Beijing and Shanghai for example. Over the past couple of years, these two cities have been highly sought out as business event destinations and they have both benefited from massive investment in infrastructure, which not only boosted the social well-being of their citizens, but also put them under the world’s spotlight as potential candidates for large scale events.

Pico Far East has been the event organizer for the Singapore Fashion Festival, the region’s most glamorous such event, for several years in a row, providing the overall concept and building the main structures for each individual set. Photo: Pico

The infrastructure and overall efforts in building up the two cities has allowed them to win hosting of the 2008 Olympics and the 2010 World Expo.

Besides Shanghai and Beijing, some of China’s cities and regions growing in popularity for MICE events and tours are Guangzhou, Chengdu, Hangzhou, Guilin, Kunming, Suzhou, Xian, and the city of Sanya on Hainan Island.

The mega events held in China create what should be a MICE industry thriving on the international exposure and demand from major multi-national companies searching for new destinations in Asia. While the hardware and facilities in China are now comparable with most destinations in Asia, the areas that require fine details are still struggling to be met adequately.

The massive amount of planning and logistical preparation that must go into participation in major events like the Olympics certainly suggests that your company is very well organized and efficient. Does the daunting level of groundwork and logistical coordination become an entry barrier to the industry that keeps potential competitors for entering the sector and helps you maintain and grow domestic market share?

Singapore was the host for the APEC meetings last year, and Pico and its subsidiary MP International handled the prestigious meetings at Suntec Singapore and the Istana. Photo: Pico

Mr. Chia: The industry does require a high level of groundwork and logistical coordination. Pico differentiates itself through its well-established brand name, excellent track record, extensive sales network, strong cash position and quality production. All these attributes pull together automatically to form a barrier against rivals.

Riding on increasing awareness of the importance of goodwill and branding, Pico is expected to see positive growth, especially leveraging on the strong foundation from our experience in the past mega events and with good support from our in-house production facilities and talented team.

The company’s widely diversified customer base, our ability to capture over 70% of repeated business, and our estimated 60% market share in Hong Kong, Singapore and China (Beijing and Shanghai), is indicative of our leading position in Asia.

As a professional services provider for events in the PRC, I would imagine that your firm has very little if any exposure to the health of overseas’ economies or exports. But how closely linked is your company’s performance with that of the PRC economy? And is China’s push to moving its citizens to spend more and rely less on exports a major potential growth driver for Pico?

Mr. Chia: PICO is a worldwide MICE industry expert and we provide service to all over the world. It is part of our strategy in recent years to further expand our networks in Asia and establish foothold in the Middle East.

The group is evaluating different business opportunities in China and Asia, e.g. Korea, Singapore, and already started venturing into some first-tier cities in China.

Based on our six month results ended April 30, business in Greater China accounted for 60% of our total turnover which is quite substantial. Although Pico has placed primary focus on operations in Greater China which generates over 50% of revenue, we believe the current optimistic economic environment in Asia -- particularly in Hong Kong and China -- could also further strengthen the counter’s strong foothold in the industry.

PRC Beachhead: The ‘Great Wall of Steel: Exhibition of the Achievements of New China’s National Defense and Army’ – which took place in Hong Kong and Shenzhen, was attended by many of the nation’s notable leaders - showcased the history of the country’s defenses with hundreds of valuable exhibits. Not only did Pico produce and construct the myriad elements of this unusual and significant event but successfully overcame major bureaucratic challenges in transporting six military tanks and a massive gold statue, which had to clear the severe restrictions and procedures of Hong Kong and China’s national security and customs bureaux. Photo: Pico

Over the years, China has opened its doors and provided ample opportunities for local events and exhibition companies in the Asian region. Since the training and experience received from the Beijing Olympics, Asia World Expo and the Guangzhou Asia Games, China is well-equipped to handle the local events without relying on foreign expertise.

Seeking local help not only avoids language barriers, but also ensures a quicker and perhaps smoother workflow, especially when dealing with contractors and government officials.

A company with an integrated China network can certainly minimize unnecessary hiccups. Pico has been involved in the Exhibition and Event Marketing sector in China since the early 1980s, with full knowledge of the language, key people, dynamics and cultural background required for fortifying a leading position in the China region. A lower cost production base in Asia provides Pico a competitive edge to bid for international events.

What are some of the key industry trends over the next five years that will most affect PICO?

China is becoming what Singapore and Hong Kong were perhaps 20 years or more ago. Multi-nationals are setting up shop and presence, and the related business meetings, annual conferences, incentives with a business focus, are all following suit. China’s political capital Beijing and its financial capital Shanghai have been the first to reap the rewards of this influx.

Asia is expected to emerge stronger and will come out of the financial crisis in a stronger position. By 2015, it is estimated that the Pacific Rim will attract over 100 million MICE visitors, up from 40 million in 2002.

We have 841 guests and no members online