S-CHIPS HAVE had more than their fair share of financial scandals, but there is a handful that have been buying back shares and paying dividends - which point to a healthy balance sheet and shareholder-orientation.

Among the biggest casualties was China Milk, which had a large cash hoard and seemed more than capable of repaying its convertible bonds.

So investors have been asking themselves: How does one tell if the cash is real?

To some investors, an ability to pay cash to independent third parties shows one really has that cash. These payments include share buyback, dividend payment and redemption of costly debt.

Fortunately, unlike S-chips such as China Print & Dye, Ferro China, Fibrechem and China Sun Biochem that have run financially aground, there are a handful of S-chips that have bought back shares and paid dividends.

“We feel that our shares are under-valued, " said CEO Ye Tianyun in an email correspondence with NextInsight.

The solutions provider of telecommunication pipes and towers began seeing a strong earnings surge during 1Q2009, when it began benefiting from the restructuring of China’s telecommunications sector.

It paid a dividend of 0.622 cents per share on 2 Jun, translating into a dividend yield of 4% based on a recent closing price of 15.5 cents. 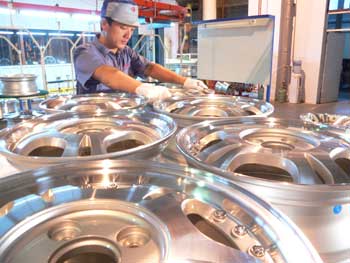 Then there are those that redeem their convertible bonds, such Lizhong Wheel and China New Town.

Coupons were 3% per annum, but the bond covenant provided for redemption by Lizhong Wheel at 125% of face value in Aug 2012, and works out to a hefty weighted average effective interest rate of 9.3%.

When Lehman Brothers collapsed in Sep 2008 due to the global financial crisis, Lizhong Wheel proactively approached Lehman’s receivers to negotiate for early redemption.

They successfully bought back the convertible bonds for US$15 million on 29 Apr 2010, using internal funds and external borrowings.

The result: Lizhong Wheel not only repaid the debt but also achieved a reduction in both principal and interest expense.

According to the bond covenant, full conversion in 2012 would have diluted shareholders by up to 15.8%, based on Lizhong Wheel’s issued and paid-up capital of 235,025,550 shares.

Although the aluminum alloy wheel maker was badly affected by the financial crisis, the management of Lizhong Wheel decided to tackle its debt issues.

This allowed the Group to start on a much stronger footing when the industry recovered gradually from the second half of last year - the same year when China overtook the US to become the world's largest auto market.

That year, domestic automobile sales had surged an exceptional 46% year-on-year to reach 13.6 million units as a result of government stimulus measures.

We have 534 guests and no members online