STRAITS ASIA RESOURCES: CEO stumbled on his pot of coal

Sebuku is an island, so the transport cost to move coal to ships is very low. Photo: Straits Asia Resources.

THE KEY personality behind Straits Asia Resources is its CEO and co-founder, Mr Richard Ong, 59, who lived in various parts of Indonesia for some 30 years. He relocated back to Singapore only four years ago, but has not exactly been lusting for publicity even after the company went public.

I recently had lunch with him at Pine Court in Meritus Mandarin hotel. He showed up in a dark suit, sans tie, and at first glance looked very much a corporate man instead of someone who has spent most of his life in the rugged outdoors. But he had a tan – and a story about coal mines, remote parts of Indonesia and the sea.

It didn’t take much to get him going with his story, and then he couldn’t apply the brakes easily. Thus, it was at least 20 minutes from the time the appetiser was served before he slowed down and and eyed the three dishes already laid out, and we all could finally begin eating.

His engaging story contained some elements that were unexpected of a Singaporean. How on earth did he end up with a 30-year concession for a coal mine on one of Indonesia’s 17,500 islands?

Early on in life, Mr Ong had struggled and through hard work and a big stroke of luck got his break in life on an island south east of Kalimantan. That was back in 1994, when he and a business partner arrived by helicopter on Sebuku island which is off Balikpapan, a center of petroleum production in Kalimantan.

About 4,500 people lived on the island in poverty and isolation. They had no school, no piped water, no electricity supply. On the entire island, there were just two motorcycles.

Riding pillion on the motorcycles, Mr Ong and a business partner paid the villagers to take them out to explore the terrain. They had just taken over a concession to a coal mine there against the advice of some people who were supposedly in the know.

As part of the concession agreement, Indonesia - the world's number one coal exporter - is entitled to 13.5 per cent of the coal production, which would be sold on the Government’s behalf and the cash proceeds paid to the Government.

“No one wanted the concession. The area was said to have only 400,000 tonnes of coal. My two partners and I decided to take a chance.”

He added: “Coal mining is about moving earth first. We had experience in earth-moving. Our company had moved more than a million tonnes of earth, so no problem there.”

On top of that, as Sebuku is a small island, he knew that it would be relatively cheap to transport coal to ships. As it turned out, the site proved to be one of the lowest-cost producers of coal in the world. Mr Ong hired experts to ascertain the quantity of coal in the ground – and was greeted with the delightful estimate of five million tonnes (which is very low compared to what would be discovered later).

In 1997, construction of infrastructure and mining facilities started and coal was produced and sold the next year. Sebuku was the only mine which Straits Asia Resources had when it launched its IPO.

A handful of SGX-listed companies are an indirect play on the mining industry, such as Perth-based AusGroup which provides equipment fabrication services to the mining industry in Australia. By the time Mr Ong ventured into Sebuku, he had already spent many years in Indonesia which he had considered to offer better opportunities for someone like him who left school at the age of 16 to start work.

The Indonesian part of his career began only after he had worked in Singapore as a surveyor and then a project manager with a Singapore company, Straits Engineers, whose projects in those days included expanding the width of the Malaysian side of the Causeway. When the work was completed after about four years, Mr Ong left for the fledgling office of Straits Engineers in Jakarta in 1975. This was soon after he got married, and it was made possible by the almost unlimited understanding of his wife.

“It was a great challenge for me in Jakarta. I didn’t speak a word of Bahasa Indonesia and I was Chinese-educated. I had a lot to learn about dealing with government officials and marketing to customers. But I was young and had a lot of energy.”

There was ample marine engineering work from the oil majors for anyone with enterprise and energy, and Mr Ong proved himself sufficiently to be appointed the head of his Jakarta office by the time he was 28. By 1984, the Jakarta business became established as PT Indo Strait.

The work was tough. When the company did dredging work, it was the first to go into a development site, such as that for oil exploration. Mr Ong would stay on a barge for several days. The workers’ food supplies were supplemented by what they could catch from the sea.

“I remember when my eldest son was born in 1978, I was excited but couldn’t come back to Singapore. I booked a call from a ship’s radio to speak with my wife in hospital. I booked it at 8 am and was put through only at 2 pm!”

He later did find an opportunity to return to Singapore for two days to see his newborn. Typically, trips home were an annual affair during Chinese New Year as flights cost several times more than they do now and they were not as frequent. In part, work took Mr Ong to the far flung corners of Indonesia. “I spent a few Chinese New Year periods away – in remote parts of Kalimantan,” he said.

In 1992, his parent company, Straits Engineers, after shaking off some losses from its new timber concession in Papua New Guinea, partnered an Australian company to buy a copper mine in Australia.

It was around that time that Mr Ong and two partners at Straits Engineers secured the concession for the Sebuku coal mine. They later decided to sell to Straits Resources an 80 per cent stake in the company that they had set up, given that Straits Resources was the one with expertise in mining.

The sale didn’t rake in a lot of money for the trio as coal wasn’t worth a lot in those days. In fact, in the first year of production, the mine’s production of a million tonnes was sold at merely US$18 a tonne. At this recollection, Mr Ong broke into a laugh at it hit home again for him how ridiculously low the price had sunk, compared to the US$100-plus that a tonne of coal now fetches.

“For every tonne, we lost US$1. We had committed the sale and had to continue with the delivery.”

Fast forward to 2000, when coal prices started to climb and the global commodity boom was in its nascent phase. The Sebuku mine started raking in US$20-30 million in profit a year from exports, mainly, to power generation companies in Japan, South Korea, Taiwan, Malaysia, Hong Kong, India and as far as Europe.

Mr Ong proposed to his fellow directors on the board of Straits Resources that the mine business and PT Indo Strait be spun off as a subsidiary. But would the Singapore market appreciate a mining business? Against such uncertainties, Mr Ong said: “I wanted it to be listed in Singapore. There’s a lot of money parked here, and a Singapore listing would give the business a lot of credibility to investors.”

With that, Straits Asia Resources was born. Mr Ong relocated back to Singapore to set up
its head office and help in the planning for its IPO. In late 2006, nine years after Mr Ong rode a motorcycle to survey the Sebuku terrain, Straits Asia Resources sold stock at 60 cents apiece, which translated into a market value of $550 million for the company. 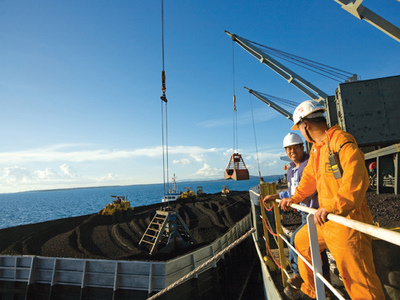 Mr Ong’s travel destinations these days are an eclectic mix of high-powered financial centres such as London to meet fund managers and, of course, the coal mines in Indonesia. He travels about once a month on average to the mines. He flies about two and a half hours on SilkAir from Singapore to Balikpapan where a chartered 14-seater will fly him to Straits Asia Resources’ airstrip on Sebuku within an hour.

To get to Jembayan, he travels by road for two hours from Balikpapan. “I’m a hands-on CEO. I want to travel to the mines so I can tell the true story to investors every time.”

Living conditions at the mines

Living conditions for staff at the mines are decent: There are television sets and karaoke systems for entertainment, and even Internet access. Rooms are air-conditioned. After some protests in the earlier years over compensation and environmental issues, the Sebuku community and local government officials now have good relationships with Straits Asia Resources, especially Mr Ong. “They know me very well. We have helped improve the living standard by building their water system, schools, power supply, and road network. We also contribute to ad hoc events such as social celebrations.”

On the home front, Mr Ong now finds himself with more time for his family - three sons and a daughter, ranging from 31 years of age to 18. He already has a first grandchild, a nine-month-old girl. His wife, Lew Yoon Len, a homemaker, is active in helping organize Chinese cultural events. The family live in a semi-detached house in Upper Bukit Timah. Mr Ong is involved in social and charity work for his constituency and communities near his residence. Asked for details, he cited his not-insignificant donation to a project but requested that it not be publicized.

By 3 pm at our lunch interview, Mr Ong had spoken for some two hours and not mentioned a word about the fine food we had eaten – which suggests he is not particular about food, an inclination no doubt derived from years of working in environments where fine food is the last thing you can expect.

The one last thing he had to say was about work: that is, his vision of his company becoming a global player. It would be a matter of time before it acquired new mining concessions in other parts of the world, he said. Given how humble a start Sebuku was, Mr Ong might just be able to pull another feat off – even if he had to ride a motorcycle to check out a remote island.


This is a shortened version of the story that appeared in Pulses magazine recently, and is reproduced here with permission.

We have 2070 guests and no members online