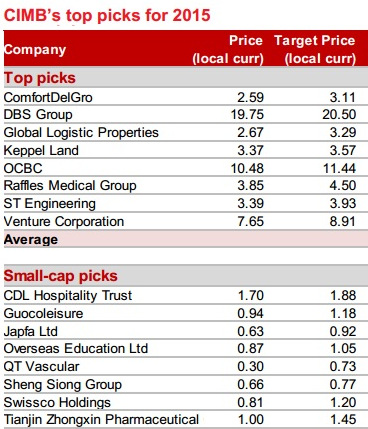 Our alpha picks for 2015 are:
1. CDL Hospitality Trust is favoured for its inexpensive valuation (yield spread of c.4.8% vs. the historical average of 3.6%) and positive outlook, supported by: 1) sustained performance of its Maldives portfolio; 2) the Claymore Link commencing operations in 2Q15; 3) four of the six Singapore hotels winning the tender to provide accommodation for 2015 SEA games participants; and 4) gradual recovery of corporate spending given tailwinds of Singapore‟s 50th Jubilee celebration.
2. Guocoleisure has significant value to be unlocked in its hotel assets (prime locations in London). The new management team is driving the re-branding exercise of the hotel business. GuocoLeisure is trading at a wide RNAV discount of 44%, and we expect potential bottomline expansion in 2016 to give confidence to the success of its re-positioning and act as a major re-rating catalyst. Risks include weakening GBP and declining oil price (that affects the group‟s Bass Strait royalty income).
3. Japfa Ltd's share price already reflects the challenges faced by its 58%-owned subsidiary, Japfa Comfeed which contributes around 55% of Japfa Ltd‟s profits. The key attraction in investing in Japfa, however, is its aggressive expansion into the China dairy business which grew as expected. 9M14 dairy revenues rose 58% yoy, with gross profit up 87% yoy and core PATMI tripled. Key risks are the still weak Indonesian poultry business and diseases.
4. Overseas Education Ltd‟s new campus in Pasir Ris is on track to open for the academic year starting Aug 15, offering 2 re-rating catalysts: 1) capacity expansion and 2) justification for a fee hike. The decline in student population seen in 2Q-3Q14 has been priced in. Key risks are 1) a delay in the opening of the new campus, 2) inability to fill capacity and 3) escalating personnel costs. 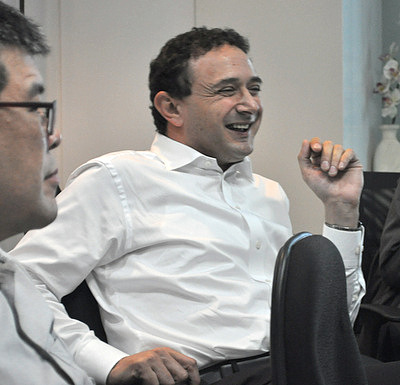 At the current stage of the company, we track QTV‟s success via its sales units (+345% yoy), which is doing well.

The recent share price drop is due to the expiry on a moratorium lock-up.

We remain confident that the roll-out of coronary Chocolate products in the US and EU in late-4Q14 and regulatory approval in Japan for Chocolate products early next year will provide the catalysts.
6. Sheng Siong Group tends to do well in a downturn as it is more likely to find new stores with palatable rents. Flushed with cash (~S$179m), it has the resources to add stores and a track record of doing so during market downturns (3 new outlets post-1998; 14 outlets post-2000). The current labour shortage has kept competition well-behaved and is likely to drive some store closures by competitors in 2015. Therein lies the opportunity.
7. Swissco Holdings could well be the next Ezion. Growth potential from FY15 is exciting given the full-year contribution of eight rigs as well as potential for more contracts and fleet expansion. Its new contracts momentum has been impressive with five new rigs added to its fleet since the Scott & English deal. Accelerated fleet expansion and new contracts are the key catalysts. We would also highlight that Swissco is under-owned.
A negative goodwill write-off of about S$25m in 4Q14 could hit its non-core earnings and provide a good entry opportunity. Key risks are further drastic deceleration in the oil price.

8. Tianjin Zhongxin Pharmaceutical Group is a play on China‟s ageing population. Its flagship product Su Xiao Jiu Xin pills, a well-known cardiovascular drug, would benefit from the authority‟s removal of price ceiling on low-priced drugs. The company‟s S-share is trading at a 58% discount to its A-shares, and its 13.5x CY15 P/E is cheaper than peers‟ average of c.20x CY15 P/E. Catalysts include sales and margin expansion. Rising raw material cost is the key risk.

We have 632 guests and no members online