Europe – Finally, light at the end of the tunnel?

This article was published recently at ernestlim15.blogspot.com and is reproduced with permission

Ernest Lim CFA CPA
THE RECENT European Union (“EU”) Summit has been hailed as the most important event in years. Preceding it, there were experts who stated in late November and early December that the European Currency (“euro”) has at most 10 days to survive.

EU Monetary Affairs Commissioner Olli Rehn commented that “they are now entering the critical period of 10 days to complete and conclude the crisis response of the European Union”. French President said failure to reach an agreement was a luxury that they could not afford. He added that EU would not get a second chance. The monumental summit has finally come to pass. So what is the verdict?

Some key developments from Summit

European leaders established tougher budget rules in a separate euro- area treaty excluding Britain. It would restrict structural deficits at 0.5% of GDP. Governments should also set up an “automatic correction mechanism” to reduce their deficits if they exceeded the target. In addition, there would be more intrusive control of taxing and spending by governments which exceed the deficit limit of 3% of GDP.

Putting their own money on the line: Euro EU states and non-euro EU states are lending EUR150b and EUR50b respectively to the International Monetary Fund’s (“IMF”) general resources.

Sped up the setting of European Stability Mechanism (“ESM”): European governments agreed to bring forward the establishment of the ESM to July 2012, a year ahead of schedule.

Diluted the demand that bondholders share losses in future bailouts: Germany which initially championed for bondholders to share the burden of future bailouts has backed down as such a demand has an adverse impact on the debt market.

According to Bloomberg, Europe governments have to refinance more than EUR1.1t of debt in 2012 with about EUR519b of Italian, French and German debt maturing in the first half alone.Besides government debt, European banks are also vying for debt refinancing. According to Dealogic data, European banks need to refinance US$665b of debt in 1H2012 and US$370b in 2H2012. Furthermore, banks may face funding squeeze due to competition for their deposits. For example, clients withdrew funds from stressed countries’ banks, resulting in the loss of as much as EUR14b for the Greek lenders in the two months to the end of October. 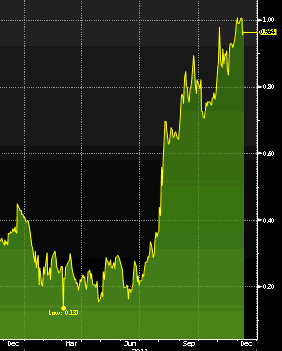 Source: Bloomberg
Banks still reluctant to lend to one another

With reference to the chart on the right, the Euribor-OIS spread (a widely touted indicator which signifies the banks’ reluctance to lend to one another) has been trending sharply higher since June and at this level of 96.4bp, it is already higher than when Bear Stearns collapsed and is almost at the highest level since Mar 2009. This does not bode well for the financial system.
Avalanche of refinancing in the next two months
There is a significant amount of debt to be refinanced in the next two months. Just to put this in perspective, Italy’s Nov 29 auction which was widely reported only saw a total of EUR7.5b refinanced at a yield greater than 7%. However, Italy has to refinance EUR320b of debt in 2012 with about a third of the debt due for refinancing in 1Q2012 alone. (This is how significant it is and it’s only from Italy…)
Wild card – response from credit rating agencies
Last week, Standard & Poor's (“S&P”) put 15 out of 17 Eurozone countries on negative outlook. (Two Eurozone countries are not placed on negative outlook because Greece already has a junk CC-rating and Cyprus was already on downgrade watch!) The response from S&P and other rating agencies remains a wild card as ratings downgrade remains possible.
Moody's Investors Service said that last week’s EU Summit provided few new measures and it is still doing a review on all European Union sovereign credit in 1Q2012.

Implementation is key
Europe has announced several comprehensive plans before but it almost always falters when it comes to implementation. More details have to be ironed out on the implementation on the fiscal compact. Firstly, it is uncertain how binding the compact will be for member countries. Secondly, who has the rights to enforce the measures remains a question mark. Thirdly, as details are ironed out, it may be possible that countries which initially accepted the compact may have second thoughts of joining (this “back and forth” is not unheard of in Europe).

In addition, while Britain has wielded its veto, three countries -- Hungary, Sweden and Czech Republic -- will be consulting their parliaments, thus it is not a given that they will definitely accept the fiscal compact. Once the compact is finalised by Mar 2012, it has to be ratified by all participating countries. Given the various uncertainties, the timeline does sound ambitious.

Secondly, according to Citigroup Research, to ensure the smoothness of the ESM, Article 136 of the EU treaty may have to be changed to align with German constitutional court but this change has to be ratified by all 27 EU member countries. In addition, all the 17 euro members have to ratify the ESM framework agreement and 90% of the EMS’s capital have to be committed. Given the “slow response time” of the Euro members, ESM may not be up and running by mid 2012.
EU Summit may spark aid from G20 through IMF
The move (European leaders making bilateral loans to IMF) may raise the probability of obtaining aid from Group of 20 (“G20”) nations. Previously, G20 nations were reluctant to help Europe as they felt that Europe was not doing enough to resolve their own debt problems. According to Brazilian Finance Minister Guido Mantega, Brazil may arrange something with Russia, India and China to aid Europe. Mexican central bank Governor Agustin Carstens also offered its aid.
Conclusion: Europe crisis may worsen first before it ameliorates
In the near term, it is likely that the ECB may have to step up its bond buying program perhaps in 1Q2012. This is because notwithstanding the measures announced via the EU Summit, it is unlikely these measures (which may deliver long term benefit) can solve the near term problem of high bond yields stemming from the lack of confidence in Europe.

The “avalanche” of refinancing needs in the next two months likely indicates that the crisis could worsen (before it ameliorates) and the ECB would then finally be compelled to enact further measures such as hiking its bond purchases. Furthermore, given the spotty track record of the Europeans, it is unlikely that the measures outlined by the EU Summit can be carried out seamlessly which would exacerbate the lack of confidence in Europe.

0 #3 Ang Moh 2011-12-16 02:47
What if US continues to recover, altho very gradually? Will the markets re-rate and sentiment improve? Currently, a lot of negative sentiment is weighing down even the stocks that have resilient and even growing earnings, such as World Precision Machinery and Sino Grandness.
Quote
0 #2 Cosmic 2011-12-15 18:34
US economy turning around too ?

http://www.bloomberg.com/news/2011-12-15/u-s-stock-futures-rise-before-new-york-philadelphia-manufacturing-data.html
Quote
0 #1 AHA! 2011-12-14 09:10
The VIX, also known as the "fear indicator," tells us that relative calm still prevails regarding the outlook over the near term. When the VIX is low, market risk is low and stock prices are likely to trend higher. When the VIX is high, lower stock prices are ahead as fear is the dominating force in the market. As we look at today's chart, we see the VIX rising just slightly in the face of scary headline news and that it remains in a downtrend since the October highs.

We have 570 guests and no members online