Lian Beng Group chairman Ong Pang Aik (4th from left) celebrating his win of the Entrepreneur of the Year 2011 award in the Asia Pacific Entreprenuer Awards organized by APF Group. Next to him is Mr Teo Ser Luck, Minister of State for Trade and Industry. The rest are Lian Beng management and Mr Ong's family members. File photo by Leong Chan Teik


Lian Beng Group: Yesterday, it reported that its 1QFY12 (ended 31 Aug 2011) net profit grew 76% year-on-year to S$19.3 million. This included a one-time gain of S$7.9 million from the sale of its New Industrial Road investment property.

Cashflow from operations amounted to S$32.6 million, and contributed to its burgeoning cash and cash equivalent of S$181.4 million as at 31 August 2011.

The Group will continue to focus on its core business of construction and will actively tender for more building projects in both the private and public housing sectors.

Interestingly, it added that it is "also actively seeking for growth opportunities in new markets."

Lian Beng had a Net Asset Value of 39.07 cents a share as at end-Aug, as compared to its stock’s closing price of 33.5 cents yesterday. 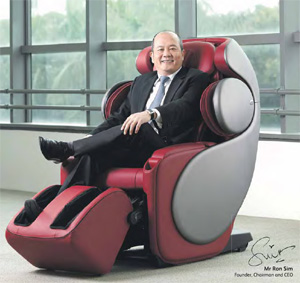 Osim International: Its chairman and CEO, Ron Sim, who bought 395,000 shares of his company yesterday at an average of 98.3 cents a share, clearly believes the stock deserves a higher valuation.

He has been a regular accumulator and stepped up his buying in the past three months as the stock dropped and dropped along with the broader market as investors took flight because of the eurozone crisis.

Osim’s business has been pretty good. Its second-quarter (ended June 30) net profit grew 55 per cent to S$18.7 million. This came on the back of a five per cent rise in revenue to S$138 million.

The company has achieved positive growth in sales and profitability for 10 consecutive quarters, owing to strong sales of its OSIM, GNC and RichLife outlets. 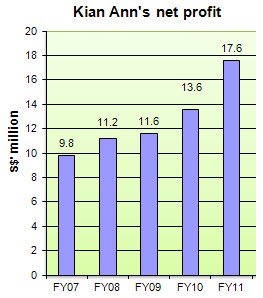 Kian Ann Engineering: One of the world’s largest independent distributors of heavy machinery parts this morning announced a dividend policy of paying annual dividends of at least 25% of the consolidated net profit attributable to owners of the parent of Kian Ann Group.

The Group has been paying dividends every year since its listing in 1996.

For the latest FY2011 (ended June), the Board has proposed a final dividend of 0.775 Singapore cent per share.

Together with the interim dividend of 0.325 Singapore cent paid in April 2011, the total dividend for FY2011 will amount to 1.1 Singapore cents per share, or 28.7% of the FY2011 net profit attributable to owners of the parent.

We have 1642 guests and no members online