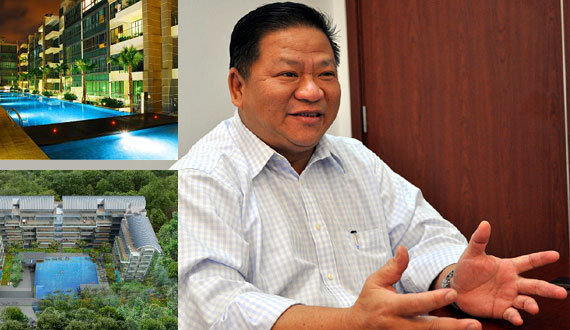 LIAN BENG GROUP, one of Singapore’s leading main construction contractors, has more than doubled its cash and cash equivalents in the past 12 months to $119 million as at end-February. 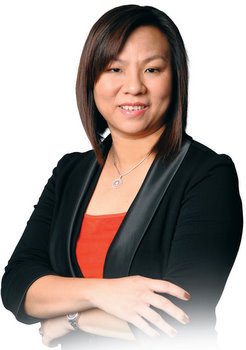 Profits from its impending completion of property development projects such as Kovan Residences and OLA Residences are expected to add to its cash reserves.

Typically, Lian Beng, which is very much a construction company rather than a property developer, holds about 20% equity stakes in property projects for which it would be able to collect back its capital investment and profit upon the projects’ TOP.

The growing cash pile will enable the company to pay a sharply higher dividend for its financial year ending May 2011, according to DMG & Partners in a recent report.

Why does Lian Beng have debt on its balance sheet then?  The management explained to NextInsight in an interview that the borrowings are for the property development projects that it has taken equity stakes in.

Such borrowings (for the entire project) are a common feature of development projects. 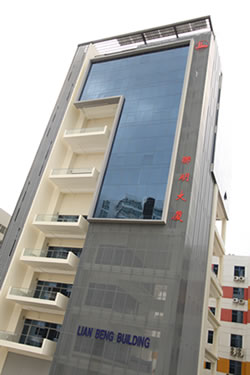 Lian Beng's spanking new HQ at 29 Harrison Rd is a showcase of its fine workmanship in environmentally friendly buildings. It has been awarded BCA's Green Mark Platinum Award.

On the other hand, Lian Beng’s core construction business is self-financing and requires little borrowing.

The company also owns a sizeable range of machinery which it has acquired over the years, which helps it to better manage and control cost.

Aside from its cash hoard, Lian Beng’s financial ratios show good value: At the recent closing price of 37 cents, the trailing PE is a mere 4.3 times, price-to-cash is 1.6 times and price-to-book is 1.4 times.

Construction accounted for about 85% of the group’s 9M2011 revenues. Its property development and ready-mixed-concrete businesses also contributed to the strong revenue growth. Net profit margin was 9.7%.

"We want to sustain this growth," said its executive Chairman, Mr Ong Pang Aik, during the interview with NextInsight.

Not only is Lian Beng’s order book for construction projects fat at S$661 million (as at 28 Feb), profits from its joint venture investments in property development are likely to be recognized over FY2012-14.

It currently has investments in 3 joint venture private condominium projects:

”Other than investing in property development projects through JVs, we intend to opportunistically invest in projects with good returns,” said Mr Ong, when asked about Lian Beng’s cash management strategy.

For example, Lian Beng recently bought and sold a vacant industrial building around the Paya Lebar area for a hefty $6 million in net profit.

This translates into a net capital gain of 25% on its book value just six months after acquiring it.

DMG reiterated its 'Buy' call on Lian Beng on 18 Apr.  Its target price is 67 cents based on a conservative 7 times FY11/12 blended earnings forecast, compared to its peers’ average of about 10 times.

This translates to a potential upside of 64.9%.

DMG analysts Selena Leong and Terence Wong believe that Lian Beng’s FY2011 earnings will double year-on-year, and that it would benefit from major public works like the Singapore's S$60 billion MRT extension as well as a strong pipeline of private projects.

Risks cited by the analysts: property speculation curbs by the government may lead to a slow-down in launches of residential properties by private developers and related construction jobs.

To address such risks, Lian Beng is foraying into industrial real estate development, having purchased a second plot of land through its 55%-owned subsidiary in Jan 2011 at Mandai Estate for this purpose.

To further grow its core construction business, it will bid for more projects, including high-end residential and public sector construction projects.

We have 1422 guests and no members online