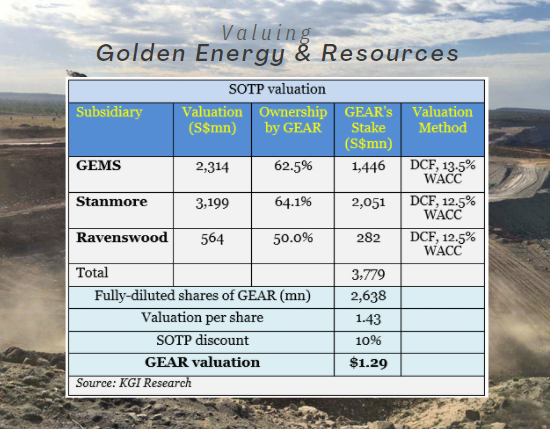 Diversified resources play. GEAR is a diversified mining and natural resources investment company. Having its roots as one of Indonesia’s largest coal miners, the group is on track to become the dominant metallurgical coal player in Australia with the acquisition of Mitsui Coal Pty Ltd (BMC) from BHP Group (BHP AU).

GEAR will further diversify into base metals that will be utilised for clean energy uses such as copper, cobalt, zinc and nickel.

Becoming the dominant metallurgical coal player in Australia. Stanmore will be acquiring the 80% interest in BMC from BHP Group (BHP AU), with the transaction slated for completion in 2Q22. The acquisition of BMC will cement Stanmore as a major metallurgical pure-play in Australia, with a total combined capacity of around 13mn tonnes.

While we have incorporated BMC’s valuation into our DCF-derived valuation of Stanmore, we have not combined it into our P&L forecast until after the deal is potentially completed in 2Q22.

Australian and Indonesian coal are in strong demand. Pulverized Coal Injection (PCI) spot prices are now trading close to the PLV HCC price, instead of the usual 25% discount, highlighting the favourable supply-demand dynamics.

Given that PCI will represent 60% of proforma-tonnes of Stanmore, the timing could not be better. Meanwhile, global trading firm Trafigura expects thermal coal to remain high given the supply tightness in the market. It expects an estimated supply shortage of 3-5% in 2022.

Thus, with the displacement of Russian coal, coal miners from Indonesia and Australia are set to benefit.

Gold production ramp-up by Ravenswood just at the right time. Ravenswood is on track for its expansion plans to increase production capacity to around 200koz of gold per annum by 1H2022. We derive a DCF-backed valuation for Ravenswood of US$434mn.

This translates to a value of US$0.11 per share attributable to GEAR’s 50% stake in Ravenswood. We believe there could be more upside given how buoyant gold prices have been trading recently compared to the long-term assumption of US$1,650 used in our DCF valuation.

Risks: The direction of coal price is the biggest driving factor of profits. Asian demand represents the largest variable. However, we expect demand to remain resilient among developing Asian countries due to the favourable cost benefits

We have 478 guests and no members online