GEAR is an investment holding company with a 62.5% stake in Golden Energy Mines (GEMS) listed on the Jakarta Stock Exchange.

In addition, GEAR owns a 60% stake in Australia-listed Stanmore Energy and a 50% stake in a private gold mine operator, Ravenswood.

Part of that large extra income went to cover the following notable costs: 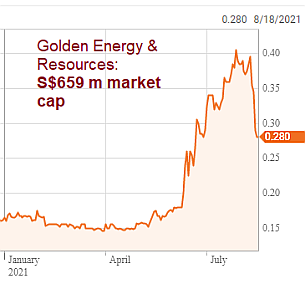 ...but 2H2021 profit looks set to be stronger, even though production costs of thermal coal are expected to nudge upward owing to higher fuel costs and possibly higher strip ratios.

0 #2 Tiko 2021-08-26 21:00
I guess, as the article says, there were losses in Australia businesses that maybe investors were not prepared for. The second half of 2021 should see Stanmore's coking coal biz generate positive gains as coking coal price has recovered strongly
Quote
+1 #1 Jeffrey Chan 2021-08-23 10:03
Dear Sir;
Why announced good results share price gone down? will there any hidden errors that public not aware ?
Quote
Refresh comments list
NextInsight.net