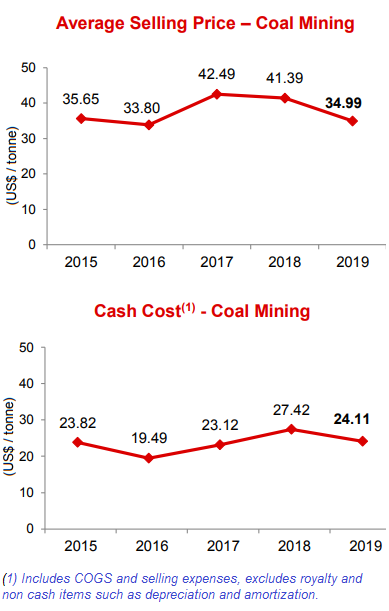 Cash cost from coal mining has been reined in by lower fuel rates, lower strip ratios and contractor rates. Source: GEAR• 2020 production: GEAR's target is to achieve 31 million tonnes of production in 2020.

GEAR said it would continue to focus on maintaining profitability at current prices.

As in the past, production targets are subject to approval of quota by the Indonesian government.

(GEAR’s target production at the start of 2019 was 25 million tonnes.)

If past patterns repeat, GEAR can be expected to be approved to produce significantly beyond 31 million tonnes this year.

• Diversification: Even as near-term demand for coal continues to be robust, GEAR continues to seek to diversify.

It has made its second investment in Australia’s gold mining sector by partnering specialist mining private equity manager, EMR Capital.

The 50-50 joint venture is acquiring Ravenswood Gold Mine and completion is expected at the end of March 2020. (See GOLDEN ENERGY & RESOURCES: In Aussie deal to acquire Ravenswood gold mine).

GEAR's other investments are equity stakes in Stanmore Coal and Westgold Resources.

Their marked-to-market values are captured in the Group's "other comprehensive income" which went from a net loss of US$30.11 million in FY2018 to a net gain of US$34.40 million in FY2019.

We have 801 guests and no members online