Defensive = less bad
We believe the potential winners from the coronavirus outbreak would be telcos (Singtel, Starhub) as earnings are resilient irrespective of the outbreak.

Domestically-driven names such as Sheng Siong, Comfort Delgro and SPH could be relatively immune.

Suburban malls such as FCT may be more defensive than peers.

Commodities/planters (Wilmar and First Resources) are less affected on the back of favourable demand/ supply dynamics. We would bargain hunt on names that have done well recently and have diversified business models and customers such as STE, VMS, CIT and UOL. 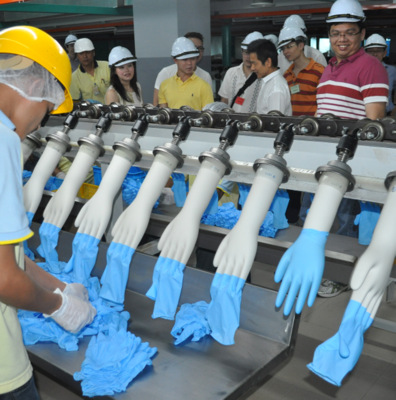 Riverstone derives c.70% of its revenue from healthcare gloves. NextInsight file photo.The continued negative newsflow from the pandemic through Chinese New Year could be a catalyst for glove manufacturers such as Riverstone Holdings.

The company derives c.70% of its revenue from healthcare gloves. Currently, our base case scenario assumes mid-teen volume growth for its healthcare gloves in FY20F, driven by enhanced awareness about hygiene and healthcare standards without any major disease outbreak.

Raffles Medical could be a medium-term beneficiary in terms of higher patient footfall redirected from public hospitals and more vaccinations.

During SARS, we observed a positive share price reaction for Raffles Medical Group, as it was appointed by the immigration and checkpoint authorities to conduct screening for fever and other symptoms at the air, land and sea border checkpoints.

We also note that the official opening of Raffles Hospital in March 2002 could have been another share price driver.

We have 869 guests and no members online