2Q saw the peak in costs arising to the shift of its manufacturing operations out of Shanghai to lower-cost Chuzhou, a move which is reaching its tail-end in the current 3Q.

The second half of a year is seasonally stronger than 1H for Sunningdale.

This time, among other things, Sunningdale expects to see higher utilisation at its new Penang plant with a new medical project.

This is one of several that is boosting Sunningdale's production of healthcare-related devices.

The company has clinched new customer projects (auto) also for its Chuzhou plant. 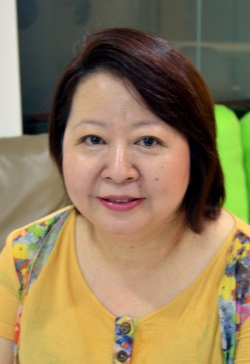 CFO Soh Hui Ling. NextInsight file photo.Regarding the impact of the US-China trade war, one of Sunningdale's clients in China has gotten the company to produce parts out of Sunningdale's Batam plant instead.

And a few clients have signalled they want Sunningdale's production of their parts to shift to Sunningdale's plants in Thailand, where they plan to relocate the assembly of their goods.

(It doesn't make sense to ship parts from China to Thailand for assembly into finished goods).

Sunningdale auto clients who are staying put in China mainly assemble the parts produced by Sunningdale into vehicles for sale in China, reckoned Mr Khoo.

Looking ahead, the Group said it will focus on tightening cost controls and enhancing capacity utilisation.

We have 428 guests and no members online