Consolidating the Indonesia water sector. With over SGD100m of cash on its balance sheet, it could likely engage in potential acquisitions in the pipeline in the near term.

It may continue to acquire and consolidate Indonesia’s private water treatment players, which would further boost its explosive growth going forward. The company may also use part of the cash hoard to pare down its debt and ultimately lower its financing costs of SGD6.9m per quarter.

Non-revenue water (NRW) is a key growth driver. With only 59% of Aquatico’s water reaching the masses, the remaining 41% of leakages can actually boost Moya’s NPAT substantially. This is if more of this NRW can be recovered and sold, which can be done through refurbishing or replacing rusty, leaking pipes as well as other methods. 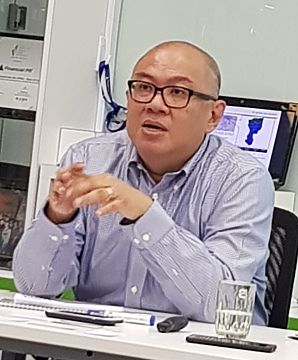 Moya managing director Irwan Dinata. NextInsight file photo Management may initiate a plan to cut its NRW by 50% gradually by 2023, which would be very beneficial for Moya.

A reduction in NRW would further boost its topline and margins extensively as the majority of gross profit from the incremental sales of NRW would likely flow down to PBT directly, as well as improve its prospects related to the renewal of its concessions.

More acquisitions to come; maintain BUY. The planned capacity expansion for two of its existing water plants, Bekasi and Tangerang, coupled with additional capex to reduce its NRW in the next five years would help to ensure strong organic growth for the company. It is now the largest water treatment player in terms of capacity, and management aims to increase this to 20,000 litres/s from its existing 13,000litres/s by 2018.

This would also give it an advantage – especially when negotiating terms concerning the buyout of existing smaller players. In addition, the IRR for a water project in Indonesia is attractive – typically around 15%, ie double that of a similar project in China.

The further cost savings, volume expansion and the recovery of its NRW providing strong organic growth, coupled with additional acquisitions in the pipeline to further boost NPAT, leads us to believe Moya’s outlook is bright.

We have 949 guests and no members online