This article, written by Jennifer Tan (left, Director, Research & Products,  Equities & Fixed Income, at the Singapore Exchange), originally was published in SGX's kopi-C: the Company brew series on 18 December 2015. The article is republished with permission.

The youthful 37-year-old finds the country and its history riveting. “Myanmar is unique – it’s so isolated, yet many investment opportunities abound.”

The Burmese are also a remarkable people. “Many are devout Buddhists, and this comes through in their kindness. They are hardworking and resilient. Things haven’t gone very well for the country in the last 50 or 60 years, yet people still get by,” he added.

Following political reforms and advances in human rights, western nations have gradually lifted economic and diplomatic sanctions on Myanmar, which was ruled directly and indirectly by its military junta for over five decades.

With a population of over 50 million, Myanmar’s US$60 billion economy is rich in jade, gold, teak, oil and natural gas. Buoyed by increasing foreign direct investments, its gross domestic product is forecast to grow above 8% in 2016 for a second straight year, according to data from the Asian Development Bank.

“It’s a no brainer – this is the time for Myanmar,” Pun said. “The country’s growth will be very strong, and a rising tide lifts all boats. For anyone with an entrepreneurial spirit, Myanmar is the place to be.”

Pun was appointed CEO of Yoma in May this year, after three years at the helm of Serge Pun & Associates. Prior to that, he spent 12 years as an investment banker in Goldman Sachs.

Pun, who has a Master of Engineering with first-class honours from Cambridge University, is equally passionate about his vision for Yoma.

The company, with a market capitalisation of S$780 million, counts Aberdeen Asset Management and the Capital Group of Companies as its second- and third-largest shareholders, with stakes of 10.05% and 8.09% respectively.

“We are in a privileged position – we have access to international capital through our listing in Singapore, while many global businesses are keen to partner us in Myanmar,” he said. 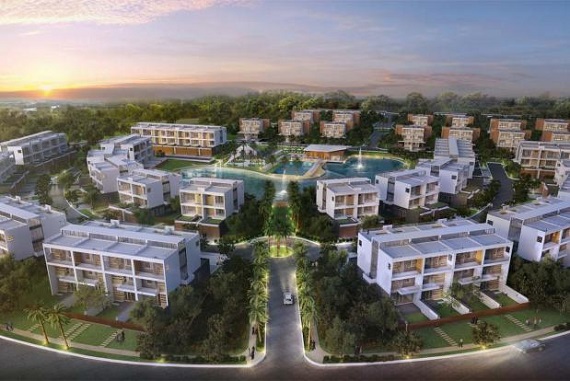 Sale of residences and Land Development Rights contributed 39.7% to 2QFY2017 revenue, driven by sale of luxury homes in Pun Hlaing Estate. (Photo: Company)
“We have a large number of options to choose from to shape our future.”

Having opportunities aplenty can also be a challenge, admitted Pun. “So many business proposals land on my desk, and they all have a high return on investment. It’s very easy to get distracted, and we’ve said yes too many times.”


“Individually, each proposal is attractive, but collectively, they may be too much. We are at the stage where if we add any more, we risk spreading ourselves too thin.”

Having a good ROI is not the only criteria to consider, as almost everything in Myanmar can make money, due to the economy's low base, Pun added.

"But every project has different risks, and we need to be mindful of the time frame. We also need to choose projects that will allow us to build for the next generation."

As a result, management has established a few golden rules: the business venture must be scalable, and should allow Yoma to be the leading operator in that market segment.

"If the ROI is great, but it only makes a few million dollars, then it may be too small for us to take on in the long term. The project needs to be worth doing," he added.

Ultimately, the key is achieving balance, Pun said. "We have to be mindful of not growing too fast or too slow. The temptation is to throw money at a problem to remove it, or to expand very quickly."

It's also critical to remain focused, he added. "This is a marathon, not a sprint. For the first few years, we were sprinting fast, and now we need to pace ourselves."

Looking ahead, Yoma still expects significant expansion in its real estate business, while its automotive and consumer segments will provide a platform for more balanced growth.

It aims to derive 50% of group revenues from non-real estate businesses by 2020. Currently, property accounts for more than 80% of total sales.

"Over the next five years, we plan to strengthen our existing business, be more disciplined about exiting non-core operations, and increase the localisation of our talent pool," Pun said.

The company has relied heavily on expatriates due to a shortage of locals with relevant skills. It has now set up a program to groom future leaders among its Burmese staff.

In terms of competitive strengths, Yoma's branding is a big plus, he added.

Apart from a robust system of corporate governance, the company has a strong reputation for protecting minority shareholders and selecting responsible business partners with a global mindset.

"We are as Burmese as it gets, yet very international. The convergence of the local and international is what gives us the edge."

We have 775 guests and no members online