MANULIFE US REIT: A Play on Vibrant Office Demand

This article, written by Jennifer Tan (left, Director, Research & Products,  Equities & Fixed Income, at the Singapore Exchange), originally was published in SGX's kopi-C: the Company brew series on 9 December 2016. The article is republished with permission.

Manulife US Real Estate Investment Trust (REIT), which listed on Singapore Exchange on 20 May 2016, has a current market capitalisation of US$521 million. The Singapore REIT - established with the strategy principally to invest, directly or indirectly, in a portfolio of income-producing office real estate in key markets in the US, as well as real estate-related assets - has seen a price gain of 4.4% since its trading debut.

Manulife US REIT is among six trusts on SGX categorised by the Global Industry Classification Standard (GICS®) as Office REITs. Over the last six months, it was the second-best performer, with a total return of 8.2% in Singapore dollar terms, behind CapitaLand Commercial Trust's 12.0% total return.

The REIT's portfolio comprises three freehold office properties with an aggregate net lettable area of 1.8 million square feet, valued at US$813.2 million as at 30 September 2016, up from US$799 million at end-December. These properties are Figueroa in Los Angeles and Michelson in Irvine - both in California, as well as Peachtree in Atlanta, Georgia. They have a weighted average lease expiry (WALE) of 6.1 years, an occupancy rate of 97.0%, and positive rental reversion of 8.5% between January and September this year.

Smith believes the trust's outlook remains healthy, based on the strength of its assets.

"We're positive about the US commercial real estate market, and you've seen that borne out in the REIT's third-quarter results," she said.

"The three properties in our portfolio are located in cities with higher growth than the national average, and each of these local economies possesses a dynamism of their own."

As of the third quarter of this year, Los Angeles, Irvine and Atlanta have registered a 12-month rent growth of 4.9%, 8.4% and 12.5% respectively, CoStar data showed. "For the next few years, it's going to be a landlord's market in terms of rental appreciation," Smith noted.

And however the US economy performs, the REIT is nestled in "a big sweet spot".

"If the economy goes to hell in a hand basket, we remain a high-quality investment with a substantial yield - we are almost bond-like in terms of our stability and resilience," she said.

"But if there's increased stimulus and more growth - as Trump is pro-growth - there will be more demand for office space, and that's also good for us. If you're talking about a jump in inflation and a faster pace of rate hikes, this is not an immediate scenario for us, and is at least one to two years away."

What's more likely to happen is slow and steady expansion in the US economy.

"We've had stable growth in the US, and that's likely to continue. It will not turn off overnight, nor will it go into a high-octane surge any time soon, which means we'll probably get a slow, upward trajectory in interest rates, which in turn will not put too much pressure on the markets," she added.

In terms of challenges, the biggest hurdle the trust faces is conveying the right message to investors, she noted. "The REIT is something very new, and the issue is how do we ensure investors understand what we're doing? For most people, America appears to be very far away."

Smith is unfazed about the widely anticipated hike in US interest rates, which could materialise as soon as next week when the Federal Reserve meets to decide monetary policy. As at 30 September 2016, Manulife US REIT had gross borrowings of US$296 million, weighted average debt maturity of four years, and an average interest rate of 2.46% per annum.

This compares with an average interest rate of 2.80% per annum and weighted average debt maturity of two years as at 20 May 2016.

"In our recent refinancing, we were extremely fortunate to have locked in an average four-year tenor at 100% fixed rate of 2.46%, and reduced our interest expenses by US$1 million per annum," Smith said. 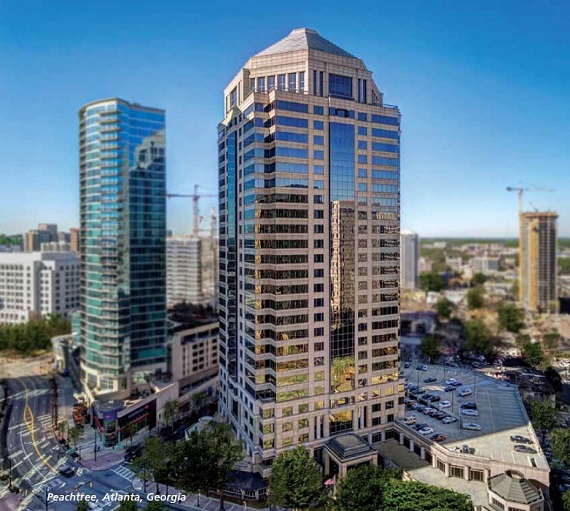 Manulife US REIT portfolio asset, Peachtree, is a Class A office building in the heart of the Midtown submarket of metropolitan Atlanta. (Photo: Company)
"The deal was an absolute triumph for the team. Brexit was like a gift to us - we could not have foretold how much of a positive impact that event would have had on our debt negotiations," she added, referring to Britain's vote on 23 June to exit the European Union that created shock waves across global markets.

The REIT's next refinancing will be in 2019. "Our debt will roll over in three years, and comes with one-year extensions on favourable terms," she said.

"Relative to the Singapore REITs, which may feel the pressure of an expected hike in rates, we believe we're in a better position."

Manulife US Real Estate Investment Trust is the first pure-play US office REIT listed in Asia. It is a Singapore REIT established with the investment strategy principally to invest, directly or indirectly, in a portfolio of income-producing office real estate in key markets in the US, as well as real estate-related assets.

Listed on SGX on 20 May 2016, Manulife US REIT's initial portfolio comprises three prime, freehold and Class A or Trophy quality office properties strategically located in Los Angeles, Irvine in Orange County, and Atlanta. The Manager of the REIT is Manulife US Real Estate Management Pte Ltd, an indirect wholly-owned subsidiary of the Sponsor.

The Sponsor, Manulife, is part of a leading Canadian-based financial services group with principal operations in Asia, Canada and the United States. The Sponsor operates as John Hancock in the US and as Manulife in other parts of the world, providing a wide range of financial protection and wealth management products. Assets under management and administration by Manulife and its subsidiaries were approximately US$718 billion as at 30 June 2016. Manulife Financial Corporation is listed on the Toronto Stock Exchange, the New York Stock Exchange, the Hong Kong Stock Exchange and the Philippine Stock Exchange.

We have 451 guests and no members online