This article, written by Jennifer Tan (left, Director, Research & Products,  Equities & Fixed Income, at the Singapore Exchange), originally was published in SGX's kopi-C: the Company brew series on 30 September 2015. The article is republished with permission.

Thereafter, Ng was involved in various opportunities, ranging from producing a lifestyle magazine for doctors, to running a medical marketing company, serving as an advisor to a medical tourism business, and managing a group of established surgeons with various specialties.

In late 2010, he hatched a proposal to form a medical company specialising in healthcare for women, and after partnering with two gynaecologists – Dr Lee Keen Whye and Dr Heng Tung Lan – set up Singapore O&G in January 2011. The company was successfully listed on the Catalist Board in June.

“You may ask why Obstetrics and Gynaecology? That’s because it deals with a happy outcome. It also has a 50:50 mix of surgery and medicine, and not many specialties have that kind of an equal breakdown,” Ng added.

The youngest in a family of four sisters and four brothers, Ng believes he was the result of an accidental conception.

“I was definitely an accident, being the last one. And my parents finally got it right, after so much trial and error,” he said, tongue firmly in cheek.

Other benefits of being the youngest include getting the best portions of food at family meal times, and occasional pampering by older siblings. One downside is that no one listens to the baby in the family, even if he is the CEO of a listed company.

“My siblings are ruled by whose voice is the loudest in the family, and I do not shout. Even now, I still do not have much say during arguments,” the father of a son, 26, and a daughter, 24, said with a grin.

Consumed by wanderlust, Ng spends his holidays traipsing around Europe and Asia, occasionally with his daughter in tow.

Although the healthcare industry is relatively defensive and fairly recession-proof, challenges abound due to competition and the persistent shortage of qualified manpower, including nurses.

“There will always be competition from restructured hospitals. We need to remain competitive, but we compete on outcome and service, not necessarily on price,” Ng said.

And being in the enterprise of pregnancy and childbirth, SO&G is in a “prime area”, given the Singapore government’s attempts to lift the city-state’s total fertility rate (TFR) through its Baby Bonus scheme. 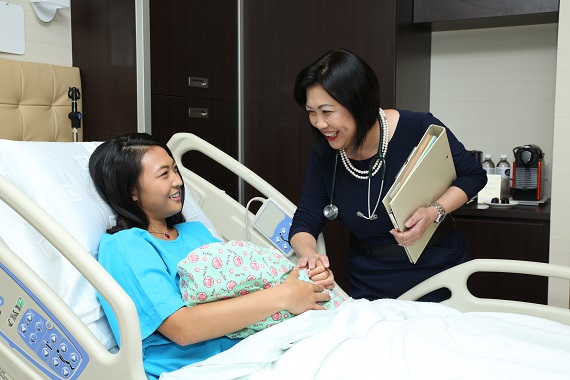 Singapore O&G is a specialist provider of obstetrics & gynaecology, gynae-oncology, breast and general surgical care and dermatology services. (Photo: Company)
Singapore’s TFR stands at 1.25 as of last year, well below the replacement level of 2.1 children per woman.

“The government is basically doing the marketing for us. And in the best of times, or the worst of times, the TFR is fairly stable. This means SO&G’s business is stable,” he beamed.

Beyond the city-state, SO&G hopes to share expertise and collaborate with private and government entities in neighbouring countries like Cambodia to reduce infant and maternal mortality rates.

“Our neighbours are not experiencing the same quality of healthcare that we take for granted in Singapore. Regional infant mortality rates range from 10 to 20 per 1,000 live births, compared to Singapore’s one to three,” Ng said.

To build a regional footprint, the company is also exploring partnerships in China, and possibly opening up clinics in Myanmar and Vietnam.

Ng, who played hockey with a zest until his knees gave out, believes in investing time and effort to shape SO&G’s future.

“I believe that in everything we do, we must not give up too easily. If something is worth pursuing, we should pursue it with determination, despite all the hurdles we face.”

We have 480 guests and no members online