CHINA YONGSHENG to be privatised? 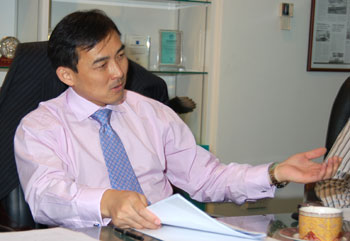 Sun Jianming, executive chairman of China Yongsheng. NextInsight file photo.CHINA YONGSHENG is a supplier of ready-mixed concrete in Suzhou which reverse took over (RTO) Global Ariel in 2007 on the Singapore Exchange.

Its profitability jumped strongly this year: For 9MFY14, the company reported net profit of RMB32.3 million versus a loss of RMB2.5 million in the corresponding period in 2013.

China Yongsheng is not cash-rich, though. It had borrowings of RMB307.2 million as at end-3Q2014. Cash on hand and at bank = RMB72 million only.

Like many S-chips, it is trading at a sharp discount to its NAV.

In the past 5 years, its stock traded between 0.6 cent and 3 cents.

What could its privatisation offer price be (assuming the offer materialises)?

At NAV? Not necessarily. There have been S-chips which were privatised at a discount to their NAVs.

Will an offer even materialise? The chances are there, considering that the Chairman, CEO and two executive directors jointly own a vehicle (Ever Universe Investments) that already holds a 68.06% stake in China Yongsheng.

We have 1432 guests and no members online