Kingston Securities said it has a “Buy” recommendation on bedding products play Casablanca (HK: 2223) with a target price of 2.6 hkd (recent share price 2.38). 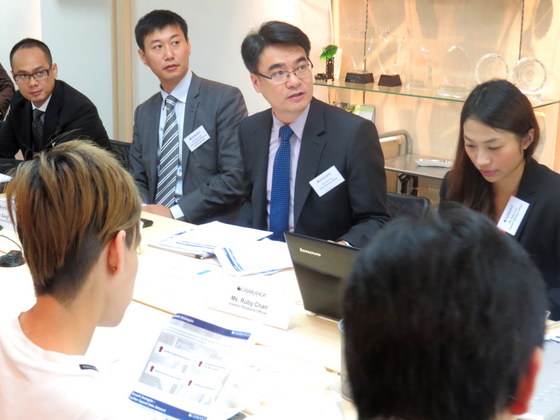 Segment revenue from the major proprietary brands -- Casablanca and Casa Calvin -- rose 6% to 390 million hkd in the financial year, accounting for 83% of the total, while that from other licensed and authorized brands grew 32.9%.

“Casablanca hopes to add 70 self-operated POS in China this year and plans to install POS systems in all the self-operated venues by end-2014, providing sales information in a timely and accurate manner while improving operational efficiency,” Kingston said.   Photo: Casablanca

Revenue from Hong Kong/Macau, and Mainland China each accounted for half, reporting growths of 6.9% and 15.9%, respectively.

As at end-2012, the Group had 382 stores, including 233 self-operated POS (points of sale) venues with the remainder being concession counters and retail stores.

“Casablanca hopes to add 70 self-operated POS in China this year and plans to install POS systems in all the self-operated venues by end-2014, providing sales information in a timely and accurate manner while improving operational efficiency,” Kingston said.

The new production space in Huizhou has already commenced operations and the Group had net cash of 41.92 million hkd on hand at end-2012, with a gearing ratio of 35%. 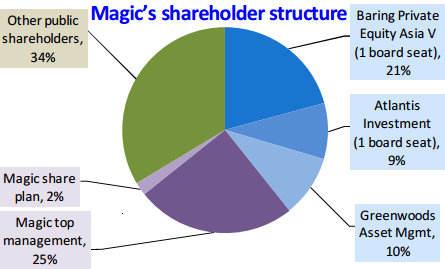 “Magic announced a plan to acquire a 100% equity stake in its online distributor Buycoor for 400 million yuan in cash.

“The proposed deal is to help Magic penetrate into Internet sales channels and further widen its gap with other facial mask competitors,” Bocom said. 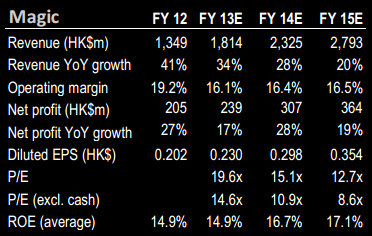 Source: BocomWhile the research house said it understands management’s ambition to ride the online shopping boom in China, it does not think the deal price is attractive given the acquisition P/E of 45x in 2012 and c30x in 2013E in its estimate (vs Magic’s own CY13 P/E of 17x).

Buycoor, established in Guangzhou in 2009, is an online sales operator with five key clients (Magic, ABC, Free, Italina and Menplus) and two million active members according to its website.

“Moreover, Magic itself is just trading at around mid-teens CY13 P/E, while paying c30x for its online distributor Buycoor (which generated about 50% of its revenue from Magic in 2012),” Bocom added.

The research house said it roughly estimates that Buycoor’s non-Magic business could add to Magic’s net profit by 6%-8% in FY13-15E.

We have 676 guests and no members online