JP Morgan said it is not particularly upbeat on Hong Kong-listed Chinese sportswear plays due to excess product in the market choking profitability.

Xtep uses entertainment and sports celebrities to promote its sportswear. Photos: Xtep“We remain ‘Cautious’ on Chinese sportswear. We recently stated our belief that excess sportswear channel inventory will likely take a significant amount of time to work through.

“We looked at the historical performance of Nike and Adidas in China and learned that the inventory build-up within the Chinese sportswear sector dates back pre-2008,” JP Morgan said.

“We undertook some sensitivity analysis to understand the level of inventory build-up assuming differing levels of sales growth.

“Given the experience of international brands in China over 2009/2010, we concluded that the build-up of inventory was significant.”

Bocom Research said is maintaining its “Sell” recommendation on fashion sportswear leader Xtep International (HK: 1368) with a target price of 2.4 hkd, based on 6.5x FY13E PE, at a 50% discount to the consumer peers (recent share price ).

Bocom said Xtep is currently trading at an “unattractive” valuation (PE of 9.1x/10.5x FY13/14E) with a deteriorating earnings outlook. 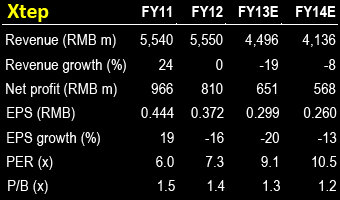 For SSSG, Bocom estimates flat results in 1Q13E and a similar level in 2Q13E, faring better than the 5% decline in 4Q12.

“The current inventory-to-sales ratio remains high at 5-5.5x (vs. 5-6x in 4Q12), though management has no plan for inventory buyback.”

“Apart from the sales de-leveraging impact, the 2-ppt increase in wholesale discount from 58% to 60% since FY13 and the sustained high operating costs are the adverse factors.”

“The retail discount remains heavy, despite being largely similar to 4Q12, and for offseason items, at least 50% off is made with further promotional offers from the second purchase onwards.”

“The net store closure in FY13E is guided at merely 100, which we consider as overly optimistic given the supply glut in the sector and the more aggressive cuts by most of its peers.

The research house currently forecasts Xtep to post a net profit decline of 20% in FY13E and a further 13% drop in FY14E, being 1% and 16% below consensus, respectively.

“We believe the longer-than-expected sluggish consumer climate in China is set to delay the recovery of China’s sportswear sector.”

We have 843 guests and no members online