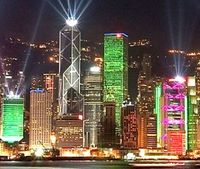 Translated by Andrew Vanburen from a Chinese-language piece by Sinafinance

THE YEAR OF THE DRAGON hasn't given investors in China and Hong Kong much to roar about.

While shares in Shanghai and Shenzhen have had a forgettable year, prices in Hong Kong have steadily been on the rise.

So much so, in fact, that the benchmark Hang Seng Index is currently hovering at 14-month highs.

What’s behind this quiet success and is there any gas left in the tank?

The trading day also marked the 10th consecutive winning session – not bad for a bourse that was near the bottom of global rankings performance-wise earlier this year.

But the gradually-returning vitality of Hong Kong’s capital market has revealed that all blue chips are not created equal, with some doing more than pulling their weight while others are... not so much.

The Hang Seng’s slow resurgence has also not been overly due to strong performances in China and New York, as both markets slumped recently and expectations of a larger QE3 from Washington never came to fruition.

And it is for that reason that investors in Hong Kong-listed equities should take the most cheer as the comeback seems to be taking place in spite of recent weakness in other major markets.

In with a Whimper, out with a Roar: Despite a slow start to the Year of the Dragon, Hong Kong shares are making a slow but steady comeback

The FOMC, under the US Federal Reserve, just announced it intended to maintain the country’s current very low interest rates until at least the year 2015.

This comes after the Fed announced its QE3 stimulus package/credit easing on September 15 – with the amount surprising somewhat on the downside.

Tokyo and Beijing soonafter followed suit, with major purse-opening spending sprees of their own, all of which put a charge into Hong Kong shares at the time that quickly fizzled out on their own accord.

Another curio worthy of note is the value of the US dollar relative to the Hong Kong currency.

Since the mid-eighties, it has been firmly pegged within a tight range around the 1:7.8 level.

However, the weak economic recovery in the US and the gradual liberalization of the yuan’s exchange rate to the greenback has put pressure on Hong Kong’s monetary authority to do something.

The fact that the Hong Kong dollar is now at 7.75 to the US dollar, edging toward 7.7 for the first time in nearly three decades may seem miniscule.

But given the tight peg, it can be seen as a sign of growing confidence in the future of the Hong Kong dollar and by analogy, its stock market.

Analysts have also been very upbeat on Hong Kong’s capital markets given the rising importance of listed exchange traded funds (ETFs) in the Special Administrative Region – a phenomenon they say will help further integrate Hong Kong with its giant neighbor to the north as well as bring more Qualified Foreign Institutional Investor (QFII) funds into Hong Kong-listed shares through a greater variety of financial products.

Housing is another bright spot.

Many Hong Kong-listed developers have recently hit 52-week share price highs, and the rising influence of ETFs and QFII money will only bring more potential capital to property plays – a colossal and critical component of the benchmark Hang Seng Index.

We have 1704 guests and no members online