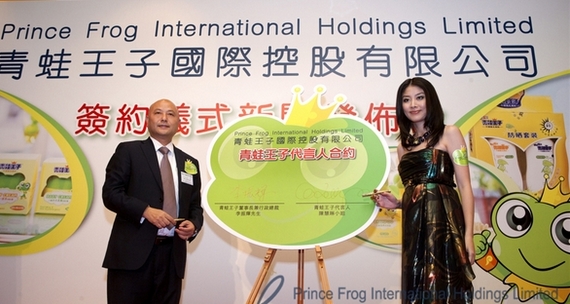 The strategic change of spokesperson, from child artist Kong Ying to Kelly Chen with her caring mother image, is to help Prince Frog enhance its brand popularity in first-tier cities in China.

With a successful history in developing its brand in the 2nd to 4th-tier cities, Prince Frog is now trying to break into first tier cities by employing various new marketing strategies and repackaging, aiming to overtake Johnson’s Baby as the market leader in the childcare industry.

Prince Frog currently is the second largest manufacturer of childcare products, according to the retail sales value in 2010.

To strengthen its competitive edge in first-tier cities, one of its marketing strategies is the introduction of new KA product lines. These are sold at a 30% premium to the old products with fresh packaging.

The “Frog Prince” cartoon was produced by Prince Frog International and televised in over 50 major domestic television channels, including the CCTV Children channel and Jiangsu Satellite TV animation Channel.

The cartoon was used as a brand building marketing tool in two TV series in 2005 and 2010. The third series of Frog Prince Animation is in the production process and could be televised soon to boost the sales of KA product line in first-tier cities.

Inserting a cartoon logo onto the company’s products can be amazingly effective. Consider Hello Kitty, Pokémon, etc. Prince Frog wishes to be a pioneer in creating its own brand for children in China.

The management of Prince Frog considers the new packaging of its products, along with the engagement of new spokesperson Kelly Chen, could “upgrade” its brand image in first-tier markets. The management is now focusing on expanding its distribution channels through Walmart in Shanghai. 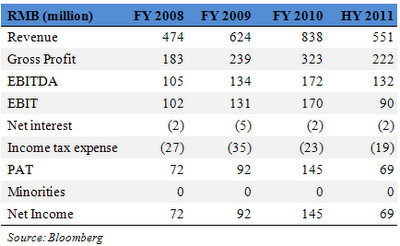 “Our products are sold in most Carrefour and Auchan outlets in Shanghai, and we are now in talks with Walmart," chairman and founder Thomas Li Zhenhui told The Standard daily. “It is the right time for us to enter first- tier cities such as Guangzhou and Shanghai as our brand has matured in smaller cities," said Li.

The Fujian-based company had 173 distributors as of June 30.

To cope with a rapid growth in sales as a result of aggressive marketing strategies, the company is planning to expand its production facilities at the main manufacturing base in Zhangzhou, Fujian Province, to fulfil production needs for the next 3–5 years with an extra 88,550 sq m gross floor area.

The new facilities could produce an extra maximum capacity of 990 metric tonnes of oral care and 500 million pieces of baby diapers.

Great marketing strategies, but how big is the market? 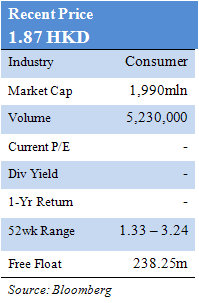 As a result of China’s one-child policy, the number of children aged between 0 -14 in China has sharply fallen from 3221 million in 1995 to 2466 million in 2009. This can have an impact on the prospects of the baby and child care market.

However, households have become wealthier and are able to afford higher quality products.

Prince Frog International (1259.HK) was one of the manufacturers that identified opportunities by shifting its positioning from the low-end to the mid-end market.

The compounded annual growth rate (CAGR) for retail sales value of children’s moisturising lotions and children bath & shampoo products was 14.9% and 13.6%, respectively, between 2006 to 2010, respectively, according to the Euromonitor’s statistics.

Driven by the vision of Prince Frog International’s management, which started building the Frog Prince brand in 1999, the company in fact has been outperforming the market. The CAGR of its revenue was 59%.

The Frog Prince brand rose 78.5% to RMB336.2 million YoY due to the greater efforts in marketing. (The company has two other brands - Shenhuxi and Shuangfeijian).

We have 1267 guests and no members online