Veteran fund manager: "The Best Opportunities in a Half-Century"

There are widely diverging views on the market outlook for 2012, with some being extremely pessimistic. On the other hand, there's Joe Rosenberg - who was chief investment officer of Loews until 1995, when he became chief investment strategist. Rosenberg has turned bullish. 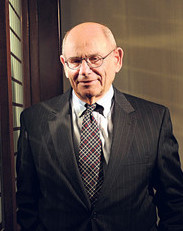 Excerpts from an interview that Barron's, America's premier financial magazine, did recently with Joe Rosenberg:

Barron's: Europe has been a big overhang for the U.S. stock market. How bad is it?

Rosenberg: People are projecting a worst-case scenario about intertwined banking systems in Europe and the United States. That fear factor is what is impelling people to stay away from equities in the United States, and is precisely why equities here are so attractively priced. Now, I am not going to say all equities.

There is a big disparity in valuations between the best companies in the world, large-cap companies—both growth and value—and small-cap stocks, which have done well over the past few years, and are not as attractively priced. The price/book ratio of the S&P 500 relative to the Russell 2000 is near a multidecade low (see graph).

In my 50 years on Wall Street, it is rare that I've been so attracted to some of the best and finest companies. I will name a few, but generally speaking, I feel like a kid in a candy store, beause I don't know where to begin. There's Microsoft, Merck, Amgen [AMGN], Johnson & Johnson, Teva Pharmaceutical [TEVA], Staples [SPLS], Oracle [ORCL] and Cisco [CSCO]. The best companies in the world are now some of the cheapest stocks.

Stocks have disappointed for a long time.

We're at an inflection point in history, and that's what I want to emphasize. I'm not talking about a trade. I don't know what is going to happen next week or next month.

In terms of economic history, the equity market looks a lot like the Treasury-bond market in the early 1980s, when I had the most difficult time convincing people that they ought to buy bonds at 15% yields. Equities can easily generate a 10% annualized total return over the next five to 10 years. And they would still not be overvalued at that point. That's the beauty of it.

What should investors do?

If investors are afraid to put all their money into equities at one time, keep cash—and then every time you get another one of these scares, add to your position.

These scares are nothing new in financial history. Sometimes, the scares are financial, and sometimes they are political. I can recall worse scares than the current one. Nobody wanted to go near equities during the Cuban missile crisis. That was a much worse scare than this one. It didn't last as long, but it was much worse, because we were actually on nuclear alert in this country. You can have cheap equity prices or good news, but you can't have both at the same time.

0 #2 7599 2011-12-24 11:04
Accumulate some of the bashed-down stocks -- there is likely to be a January effect!
Quote
0 #1 Daisy 2011-12-18 09:33
Rosenberg is a brave investor to make this call, considering that the complexities of the issues in Europe are huge. On the other hand, of course, any strong moves by the European leaders to resolve this crisis will send stocks surging upward, after being down for so long. In the end, it's 50-50 in my view. Prepare for worse times, yet who knows how things will pan out for sure. China is a wild card -- what if it does something constructive to help Europe?000000
Quote
Refresh comments list
NextInsight.net