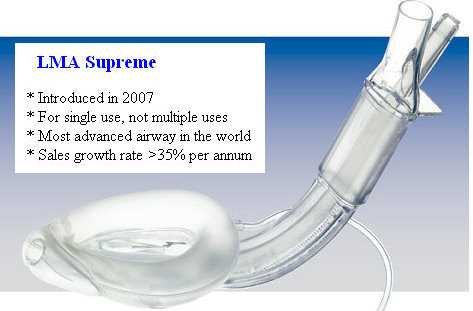 LMA's CEO, William Crothers, co-founded in 1989 a distributorship in Australia that marketed LMA products. The distributorship was 80% bought over by LMA in 2007 and the remaining 20% last year. Photo by Sim Kih

RARELY DO companies have products that control a global market share as high as the 75% that LMA International does.

LMA’s core products are laryngeal masks, which allow patients to breathe, and which support their airways, while anesthetic gas is fed into them throughout surgery.

Through continuous education of doctors and product R&D, LMA seeks to win over current users of endotracheal tubes (ETT), which account for 65% of the general anaesthesia business in the world today.

LMA is educating them on the superiority of its airway range of products in areas of patient safety and medical security.

Within the laryngeal airway masks industry, the remaining 25% global market share not owned by LMA is fought over by about 30 companies, said LMA's CEO, William Crothers, in an interview with NextInsight recently.

The curious thing is, these competitors are essentially producing copies of LMA’s first-generation laryngeal masks, whose patents have expired.

LMA created the product category of laryngeal masks back in the 1980s, and these products are now sold in more than 100 countries.

LMA listed on the Singapore Exchange in 2005 and has logistics, R&D, regulatory and QC functions in Singapore. Late last year, it expanded its range of products by acquiring Wolfe Tory Medical, a US manufacturer of medical products, for US$13.1 million cash. 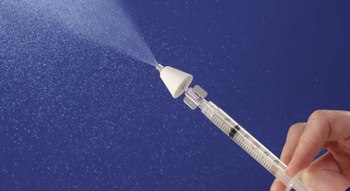 LMA MAD Nasal™ Disposable, compact atomizer for delivery of medications to the nose and throat in a fine, gentle mist. Useful in a variety of emergency medicine and pediatric cases. Photo: LMA

LMA had been selling Wolfe Tory products for a few years in Australia, New Zealand, Germany and Italy with excellent results.

These are the MAD® family of products which enable medication to be delivered in a fine mist to body parts such as the nose and mouth.

Significantly, this eliminates the need to use needles and intravenous procedures.

Overall, some 80% of LMA sales are directly to customers such as hospitals, while 18% are via its distributors.

As expected of businesses with strong market shares…

Group sales have since then tipped towards single-use products, as these are preferred by doctors for safety reasons. 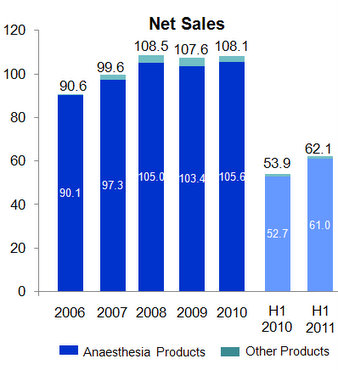 2) Revenue has been stable, even through the global financial crisis of 2008-2009. Under a new management since last year and driven by a new strategy, LMA has enjoyed sales growth of 15% in the 1H of this year.

This, in part, was also a result of maiden contributions from the MAD range.

In addition, sales growth is coming from LMA Supreme, a key second-generation product which is aiding in the shift away from its first-generation masks which have to compete with clones sold at lower prices.

The LMA Supreme, introduced in 2007, has the added feature of enabling any stomach content that is unexpectedly regurgitated by a patient under general anesthesia to be channeled out of his mouth, instead of it finding its way into his lungs.

Global sales in the 1H of the LMA Supreme grew 35%, the same pace as the MAD atomization devices whose sales are now boosted by the more extensive sales network of LMA (vis-à-vis Wolfe Tory’s).

As a result, LMA’s net profit surged 100% year-on-year in 1H this year to US$10 million, excluding a US$4.5 million net litigation settlement from a company that had infringed LMA intellectual property. 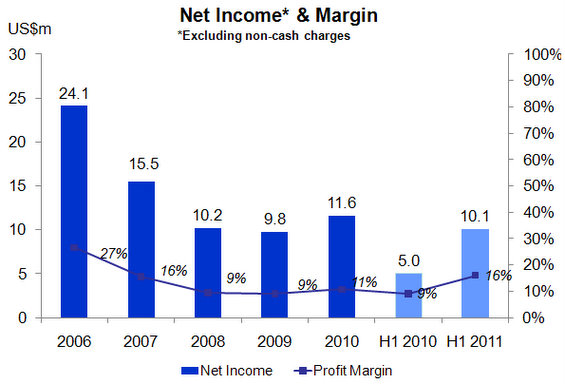 Since 2010, LMA has seen major changes to its board and management. Mr Crothers has been CEO for just over a year. Another example: Trevor Swete was appointed executive chairman in Jan 2010.

Says Mr Crothers, who relocated from Australia to Singapore last year: "My 3 biggest projects now - a revolutionary product, a revolutionary manufacturing process, and a nice-to-have gadget for anesthetists. Within the next 12 months, these projects will come to fruition, aiding LMA's top line and bottom-line."

Having divested non-core businesses, LMA will look out for M&A deals for anaesthesia and airway products, and adding synergistic products of other companies to the range it distributes.

LMA has turned more shareholder-friendly. Last year, for the first time since its listing, it declared an interim 1-cent dividend (but no final dividend) amounting to US$4.1 million, or 36% of its FY2010 net income.

For 1H2011, it has an interim dividend of 0.5 Singapore cents, and said a final dividend would also be proposed.

LMA sure can afford it. It ended H1 2011 with cash and cash equivalents of US$21.9 million and no debt. Net cash provided by operating activities rose 41% to US$10.5 million in 1H.

Says Mr Crothers: "We used to hold a lot of cash. Our thinking now is we will use the cash to grow the business or return it to shareholders. If we need money for a project, we will ask for it from the market."

LMA has completed constructing a 100%-owned manufacturing plant in the Kulim Hi-Tech Park in Kedah, Malaysia costing more than US$10 million. It is under testing and commissioning and will be fully operational next year.

New efficiencies are expected to slash the cost of goods sold by 30%, says Mr Crothers.

The plant's capacity is double that of the contract manufacturer in Singapore to whom the production of LMA Supreme devices has been completely outsourced.

Outsourced production of other LMA products is done in Xiamen, England and Seychelles. Increasingly, LMA's first generation products are produced in Xiamen, instead of Singapore, where the appreciating SGD and cost of labour are dampeners on profit margins.

We have 1691 guests and no members online