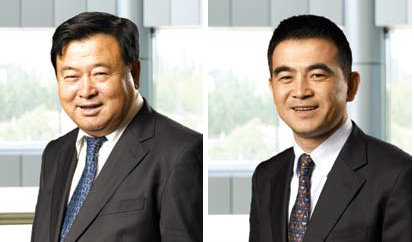 Chairman Liu Shuqing, now 61, and his son, CEO Liu Hailong, now 41. The senior Liu held a direct 43.7% stake in the company. At its peak in 2007, China Milk had a market cap of S$1 billion. Photos from annual report

KPMG, the Special Auditor appointed in April 2010 to conduct an independent review on the China Milk Products affairs, has put out its report -- but it was actually published by the Singapore Exchange this evening after the audit committee of China Milk failed to post it despite reminders.

It’s a damning report, and after reading it any reader can only conclude that the China Milk management - including Chairman Liu Shuqing, 61, and his son, CEO Liu Hailong, 41 - had done a grave injustice to minority shareholders.

Trading in the shares of the company, which produces pedigree bull semen, pedigree dairy cow embryos and raw milk, has been suspended since Feb 2010.

This was a company that once commanded a market capitalisation of S$1 billion and, since its listing in 2006, had wow-ed a lot of investors with its supposedly immense profit margin, its profitability and cash hoard.

The company at first claimed it had the US$170.56 million to meet its obligations on the convertible bonds. It just needed time and special approval of the authorities to remit the money out of the country. 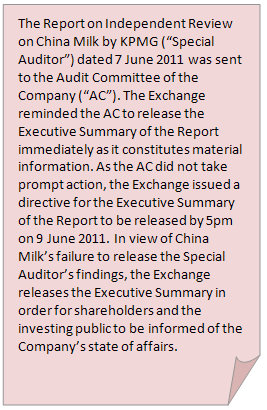 After all, it had said in its financial results announcement that as at end-September 2009, the group’s cash and cash equivalents stood at 2 billion yuan (S$409.7 million).

As matters worsened, the Singapore Exchange directed the company to appoint a Special Auditor.

KPMG was the chosen one and it found a company whose cash hoard had been milked in major ways.

When it repeatedly asked the Group to arrange an interview with its bank manager in China, KPMG was told that the manager had no time and could not assist.

When KPMG asked to interview the main contractor which did US$72.9 million worth of improvement works, they were presented with a Mr Zhang Hong Tao who came across as being unfamiliar with the works done.

In the first place, he didn’t own a construction company.

The Group had commissioned improvement works to the farm and facilities and paid USD72.9 million over a period of 5 – 6 months ending in or around March 2010.

When KPMG visited the sites, it was unconvinced.

“One would expect salubrious farming facilities after spending USD72.9 million. However, the buildings and its facilities cannot be said by any stretch of reason to be no more than basic or at best average.”

In addition, KPMG noted that the Board approval for the expenditure on the improvement works was not obtained nor has KPMG seen any Board minutes whereby the Board was informed of the expenditure.

In another major expenditure, China Milk announced on 4 December 2009 that the Group “entered into the final stages of completing the acquisition” of 40% of a joint venture company for approximately USD20.6 million.

It also said it had “earmarked” USD29.4 million to expand its farms and facilities and “secured” grassland and agricultural land for approximately USD20.6 million.

KPMG: “However, the Group had in fact spent substantially more. We have not seen any evidence indicating that the Board contemplated and approved the announcement nor discussed or questioned the merits of the investments therein during the material time right after the announcement was made.”

It added: “To date the Group has been unable to deliver to us any meaningful documents to evidence the completion of the acquisition. Instead, we are told that the acquisition is not complete pending fulfilment of certain conditions precedent, the particulars to which were not identified to us. It therefore stands to reason that since the acquisition has not completed, the shares have not been issued to the Group.”

There are many more damning findings in the KPMG report, which you can read on the SGX website.

Now it is all in shreds!

The SGX is not doing anything to address the situation caused by their ineptness.
Minority shareholders suffer the most.

How can be a great capital market when you let these type of companies list here?
Just letting in the big bad wolf on us!
Quote
+2 #13 Jeffrey 2011-07-28 13:46
1)Is our SGX helping us/doing anything to get the Chinese Govt to go after the scoundrels?
2)Our MAS/Govt should discuss with the Chinese Govt to seek redress for our Singapore shareholders otherwise NO MORE S-Chips should be allowed to be listed here, in Singapore.
3) I am stuck with so many S-chips being suspended or delisted because i thought our SGX are very smart and look after/protect our Singaporeans by ensuring all IPOs listed stringently meet our regulations/law s. What happen to our so-called due diligence by our regulating bodies and equities' underwriters?
Quote
+1 #12 lilytan 2011-07-20 11:45
It is the IPO crabs, whoever behind these chain of IPO should be JAILED.
Quote
0 #11 Simon 2011-06-13 15:16
Blardy crooks!
Quote
0 #10 Mervyn 2011-06-13 09:17
owning 44% means little if he is able to milk all the cash (or 100% of shareholders worth) especially if equity has high net cash and is trading at low prices. One can siphon $3-400 million cash but only lose $80 million. Still a good deal for the fraudulent managers
Quote
0 #9 Reck 2011-06-13 05:16
The chairman had a stake of 44%. It's S$80 million or so flushed down the drain for the old man.
Quote
+2 #8 Gambler 2011-06-11 12:12
If go to a casino, at least I get some excitement from throwing chips on the table, show hand, flip some cards, slam some jackpot machines...I speculated in China Milk, ended up getting shit!
Quote
+1 #7 Cheong 2011-06-10 14:34
Are they allowed? Of course not, it's deception. There is such a long list of trangressions committed by China Milk management -- who will bring these dirty guys to face the music? Is China Milk still an operational business - or closed shop? Can the assets be seized and sold to repay minority shareholders? Lots of questions and no answers.
Quote
0 #6 Alex 2011-06-10 08:47
Are they allowed to give such reasons when they had other reasons for resigning?
Quote
0 #5 Melvin 2011-06-10 04:35
U know what a soundrel the management of China Milk is?

When their ID Mr Sum resigned, they said he had other "work commitments". When CFO Martin Choi resigned, it was to "pursue other career interests".

We have 1346 guests and no members online