WILLAS-ARRAY: Dividend yield is 10%, dividend is 45% of earnings 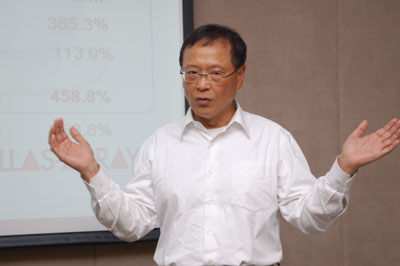 WILLAS-ARRAY Electronics Holdings has just proposed to pay a final dividend of 1.65 Singapore cents a share for FY11 (ended March), translating into a yield of 10% based on the recent stock price of 16.5 cents.

The payout, while generous, drew some comments in our forum.

In particular, the discussion centred on whether it made sense for the company, which is a distributor of electronics components mainly in China and Hong Kong, to have a rights issue in April and subsequently propose the dividend.

“Basically shareholder forked out 7.5 millions and give get back $6 million within 3 months. And wasted 1.5 mllions for doing extra work that worth nothing.”

An opportunity for us to clarify this matter came up yesterday at CIMB where Willas-Array’s management, who had flown in from Hong Kong, was making a presentation to investors.

To a question, Willas-Array’s executive director and CFO, Andy Hung, said the company would have proposed the same final dividend even if it had not carried out a rights issue.

Q: Why the rights issue then?

“We need to expand further in China and need more working capital. It’s not that we cannot get by without it. We can get by but we don’t want to raise our gearing ratio – so that’s why we got more cash in,” said Mr Hung.

He added that the size of the fund-raising of $7.2 million was relatively small, “because we were worried that some shareholders wouldn’t like it. Well, we are paying it back to them through the proposed dividend.”

Q: What was the cost of the fund-raising? 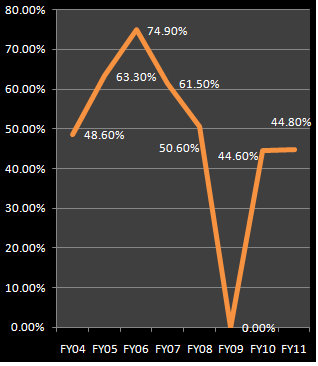 Willas-Array: Dividends paid as a percentage of net profit have been high.

Q: Going forward, will the dividend payout stay at the current level of about 40% of net earnings?

Mr Hung: “We don’t have a fixed dividend policy. We will try to maintain a good dividend when there is good profit.

"In the past two years, it so happens that we were able to pay about 40%.

"It will depend on the size of the profit, the need for working capital, etc. If our profit stays around the same size, probably we will do about 40%.”

0 #2 Tan 2011-06-02 06:54
Liquidity is poor for Willas-Array, but
in return, you don’t have to part with an arm or a leg to buy this stock.
Given its strong dividend yield track record, the shares usually gain ahead
of final year results on anticipation of a good dividend, making an
investment in Willas-Array looking akin to a fixed deposit. So, if you don’t
need the cash for the coming year, you might want to ponder parking
some of it in Willas-Array. -- from CIMB report
Quote
0 #1 Alicia 2011-06-01 03:12
From the chart, it is clear that Willas has a strong inclination to pay out dividends. (FY09 was zero becos of a net loss arising from the global financial crisis). This looks like a dividend yield stock to buy and keep. Capital gain - nah. small cap, not v liquid. Just my 2 cents worth.
Quote
Refresh comments list
NextInsight.net

We have 1262 guests and no members online