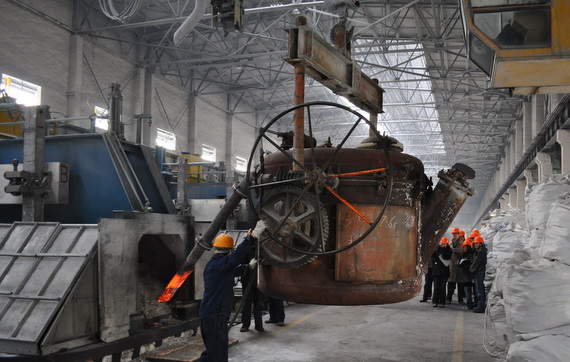 A giant kettle-like container is taking in molten aluminum produced in a smelter of XinRen. Photo by Leong Chan Teik 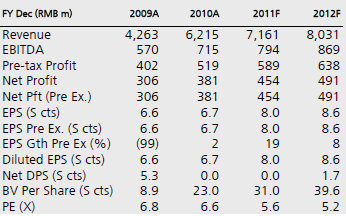 The capital for acquiring the two plants is RMB 442.4m, which is currently accounted under long-term liability due to equity holder. Hence its acquisition will result in RMB442.4m cash outflow while long term liability will decrease by the same amount.

To lift discount on valution. The PRC government regulates foreign ownership on aluminum smelting plants, which explains Xinren’s indirect ownership in the plants. However, the company had sought consultation from the PRC legal adviser referring to the successful case of China Hongqiao. We believe the valuation discount should narrow going forward given that the reason for the discount was its indirect ownership in the two smelting plants, its major revenue-generating assets.

Maintain BUY, TP upgraded S$0.76 pegged at 9.5x FY11F PE reflecting the transition to direct ownership of its smelting plants, which translates to 7.2x FY11F EV/EBITDA and 2.5x FY11F P/BV. Our TP is also benchmarked at a 20% discount (25% previously) to the weighted average of its global peers. 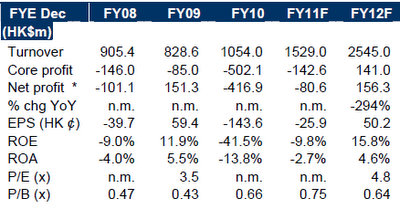 We are maintaining our BUY call on Anwell Technologies (Anwell) despite forecasting the company to stay out of the black until FY12. However, note that we do expect its net losses to decline sequentially in FY11 as the worst for the company is seemingly over after having seen a HK$129m loss in 3Q10 while earnings from its solar business is set to improve even further.

For the near-term, any share price catalysts could be in the form of announcements of tie-ups with the Chinese government for the company’s solar division or contract wins from their Blu-ray segment. 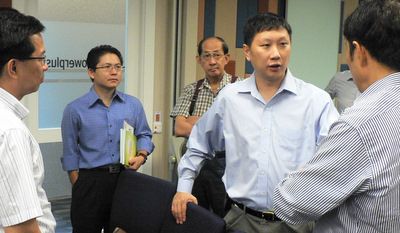 Franky Fan, chairman of Anwell, speaking with investors. File photo by Leong Chan Teik
Trading below historical averages: Nevertheless, we also highlight that our recommendation is not targeted at those investors whom have a conservative profile as we anticipate the company to remain in the red for the current year.

Turning around in 2012: As seen from Figure 1 below, we believe that Anwell would be back in the black by next year as production capacity within its thin-film solar division is increased while we also expect the sale of one thin-film equipment by the company in 2012. Furthermore, the Blu-ray business is forecasted to gain further traction. On the negative front, however, we are still anticipating low profit margins from its CD & DVD segments.

Out with the old, in with the new: For the company’s optical media division, we understand from management that it is now focusing more on the Blu-ray rather than the DVD business as the former commands higher margins. With utilization rates close to full, production capacity for Anwell’s Blu-ray segment is forecasted to churn out 5 million discs per month by year-end from the current 1.2 million discs per month as the company converts more DVD machines into Blu-ray machines.

Recent story: ANWELL TECHNOLOGIES: Worst is over, focus now is on marketing and sales of solar modules

We have 1972 guests and no members online