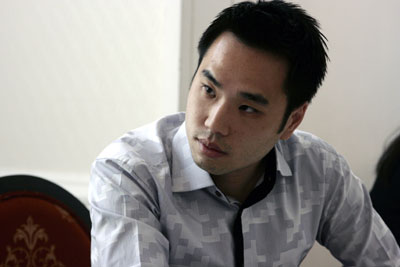 The founder's son, Darren Teo, is business development manager and upbeat about Super's prospects in China.

We are positive on Super for the following reasons:
1) It is entering its peak season

3) It has completed expanding its facilities, and is targeting China’s market

The TDR is now trading at 11.9X FP2011 PE. As a dominant player Southeast Asia’s emerging economies, as well as China concept play, Super’s valuation is lower than Taiwanese F&B stocks, and much lower than other China concept plays. We believe its TDRs, currently almost on par with its Singapore-listed shares, are priced attractively. Any price records by its Singapore-listed shares will benefit its TDRs. 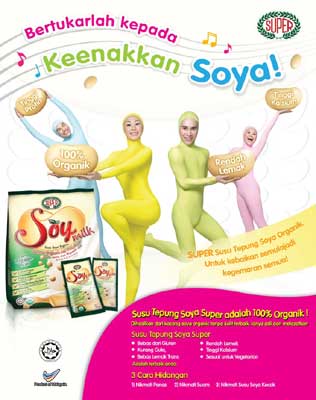 Organic soymilk is a recent product.

Super’s cost of production has been reduced after shifting its facility from Singapore to Malaysia. Even though prices of coffee beans have been rising, a cheaper production base plus low inventory costs has enabled it to achieve gross margins of 39.5% for 2010, higher than 34.9% for FY2009. We forecast 2011 gross margins will be maintained at about 38.7%

Historically, 4Q and 1Q are peak sales seasons for Super. This year’s winter is colder than the past, and we believe this will boost coffee sales. We are forecasting 4Q sales to grow 8.4%, and reach NT$94 million, gross margins to slip marginally to 39.3% due to higher raw material prices, and net earnings to grow 11.5%. Our EPS forecast is 3.2 Singapore cents. We forecast 1Q2011 EPS to reach 2.9 Singapore cents on continued peak season sales. 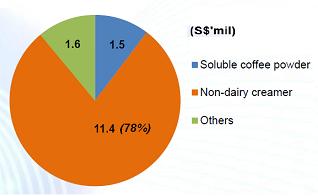 Super’s Southeast Asian business is stable, and we forecast CAGR of 5% to 10% in the years ahead. China contributed about 10% to group sales in 2009, which comprises of both retail products as well as ingredient sales. For China, the bulk of this is from ingredient sales.

Its Wuxi plant now has annual capacity for 25,000 tons of non-dairy creamer, or 50,000 tons in China. The added capacity has boosted its 3Q2009 ingredient sales 1.5 times. We expect Super to add one to two production lines next year, further increasing capacity by 25,000 tons.

Based on China’s potential for the ingredient market, we are forecasting that ingredient sales in China will grow 63% year-on-year in 2011, and make up 14% of group sales. Including retail products, we forecast that China will contribute 20% to group sales, and will be its main growth driver.

Super’s strategy is to grow its Southeast Asian business and China market simultaneously. A second strategy is to have twin engines of growth in retail product as well as third-party ingredients.

We have 1345 guests and no members online