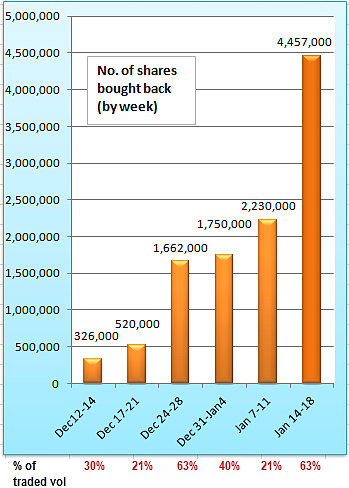 This chart was updated after the market closed on Jan 18 to reflect the full week's (Jan 14-18) data.

DUTY FREE INTERNATIONAL has attracted active discussion in our forum, so we decided to put together the chart on the right.

From the chart, and that of the stock price movement, one can see:

1. Duty Free's buyback has been rising non-stop since it began in December, marking the first such action ever since the company was listed on the Singapore Exchange in January 2011.

2. The stock price has surged along with the buyback.

3. The buyback in just two days in the current week (Monday & Tues) has far exceeded the total bought in any previous week.

4. Percentage-wise, the current week is seeing the highest at 72% of the total volume of Duty Free shares traded for the period.

5. The current week's buying is notable for its beneficial impact on the share price, supporting it at a time when the broad market was correcting. 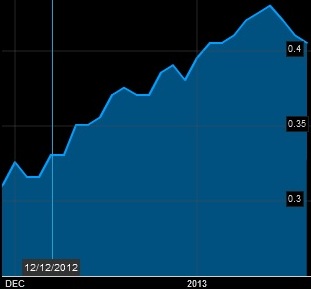 Duty Free stock has risen from 33 cents to a 52-week high of 43.5 cents since the start of the company's buyback.

Duty Free has a clear intent regarding the shares it bought back: It cancelled them immediately, instead of classifying them as treasury shares which could be re-issued out in future when stock options are exercised, or as currency in M&A activities.

The cancellation of the shares led to a drop in the outstanding shares. The total cancelled to date is 9,895,000, or 0.8873% of the issued shares of the company.

It is not an overwhelming figure, but Duty Free doesn't have a high free float to begin with. Its No.1 shareholder, Malaysian listed company Atlan Holdings, holds 81.1%.

Duty Free may or may not continue its buying spree which has cost roughly S$4 million, but it is going to be raking in a big cashpile (by March 2013) from the completion of the sale of The Zon in Johor for RM325 million.

But if it continues to buy back shares and cancels them, liquidity will be reduced.

This is contrary to what many companies like to happen to their own shares, and raises questions as to whether there is some larger over-riding reason behind the buying and cancelling of shares.

Your views are welcomed. Post below or in our forum!

This completion is expected, so impact will not be felt immediately I think.

Then we also need to know how much rental they are paying to operate from Zon Berjaya now. Is the rental too high to affect the profit margin??

Have to wait till July. In the meantime, usually in Q2 and Q3, share market will be bearish based on past trend (past few years).

And Duty free has become illiquid recently as the amount of free float is getting lesser and lesser due to the share buyback.

I will stay sideline at the moment. If market becomes bearish and couple with illiquidity of the share, I scared being trapped.

We have 1853 guests and no members online