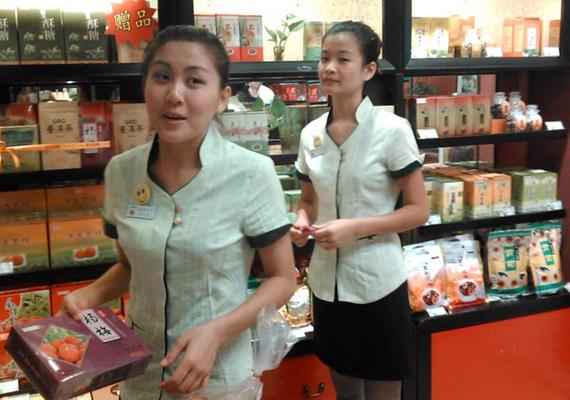 Tenfu's shop in Shenzhen's Central Walk has ample room for shopping carts, being located next to a massive Carrefour hypermarket.  Photo: Andrew Vanburen

WE RECENTLY took you on a vicarious visit to Tenfu’s sprawling tea cultivation and processing facilities in Fujian Province.

Today we follow up with visits to a few of its over one thousand shops strategically located across the world’s biggest tea-drinking nation.

And management is suited to a “tea” as the company not only went public in Hong Kong recently, but has doubled its profits to 220 mln yuan in just two short years. 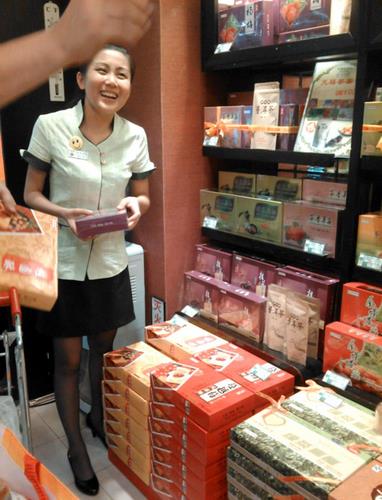 The author making a purchase at Tenfu. It's hard not to appreciate a staff who politely laughs at even the corniest of quips.

Tenfu (Cayman) Holdings Company Ltd (HK: 6868), is on a messianic mission to spread appreciation for the age-old tea-drinking culture in the homeland of the steeped beverage, as well as overseas.

Its eponymous museum and university are key, but the rapid mushrooming of its shops across the region is at the forefront of the campaign.

The lion’s share of its revenue – nearly 75% in the first half of this year or 624 mln yuan – was derived from the sale of tea leaves from its 1,000-plus strong matrix of shops across Mainland China.

January-June tea leaf revenue also jumped nearly 75% year-on-year, suggesting that the rising ranks of middle-class consumers with increasing levels of disposable income were not abandoning the region’s traditional tastes for tea in favor of coffee – at least not yet.

Perhaps variety has something to do with it. 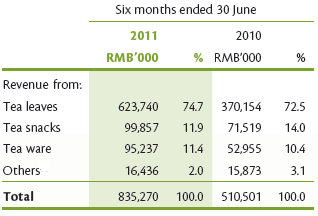 Leave it to the Leaves: Tenfu's 1H revenue breakdown

NextInsight checked out some of the chain’s packaged tea leaves, tea snacks and authentic taste-testing facilities in Xiamen, Fujian as well as Shenzhen to see how in step individual shops were performing in terms of the group’s sales breakdown.

For the first half of this year, group revenue contributions from tea leaves dominated the top line, contributing some 74.7%, up from 72.5% a year earlier, clearly demonstating the products' core importance to the top line.

Meanwhile, tea ware product sales contributed 11.4% to revenue in the January-June period, up a full percentage point from a year earlier. 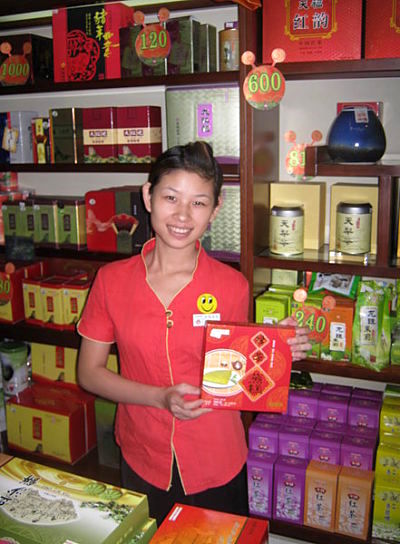 No Place Like Home: A smiling staffer from a Tenfu shop in the chain's home base of Xiamen.  Photo: Andrew Vanburen

In high-traffic locations in both Xiamen and Shenzhen, store managers all reported that take-away sales of tea leaves were their top “breadwinners,” a finding fully in line with the group’s overall revenue contribution breakdown.

And the top selling tea by a longshot at all locations was Tieguanyin,

"Guanyin is a deity familiar to all Cantonese," said a shop manager at a Tenfu in Shenzhen.

In the Xiamen shop located streetside in Jimei District, friendly and exquisitely uniformed staff pointed me toward a broad selection of tea cakes.

I didn’t want to overstay my welcome, nor ruffle feathers with my incessant photo taking, so I settled on a box of 50 yuan green tea-flavored cakes.

I jokingly asked which of Tenfu’s teas these particular cakes went with, which elicited somewhat polite smiles and further photo-taking opportunities.

The shop was pristinely clean and the two tables for tea-tasting were something out of a heretofore era in terms of their style and air.

I observed as customers carried on internal debates on which tea to take home, whereupon friendly smiling staffers would gently usher them to the tasting tables for a leisurely sit, a friendly chat, and the ability to compare samples of different leaves.

This struck me as an ingenious way of placing the consumer “in the moment” and recreating an esoteric and thoroughly authentic tea-drinking experience.

The Tenfu shop in Shenzhen differed from Xiamen in that it was situated inside a very busy, upscale shopping complex – Shenzhen’s famed “Central Walk” (中心城) retail complex.

Nestled against a sprawling and ever-busy Carrefour hypermarket, the logic behind this particular Tenfu teashop's location was immediately evident.

Tired shoppers often longed for a place to sit and sip after spending hours on their feet.

And a fair amount surely hankered for the burst of energy that a cup of on-site brewed tea offered before taking on the challenges of shopping in China’s most crowded city – Shenzhen.

Although the F&B business is one of the most competitive and failure-prone out there, and there is no shortage of competition for Tenfu, after visits to the company’s base in Fujian, extensive talks with its legendary founder Li Ruihe and stops at a few select shops, NextInsight believes it is hard to imagine Tenfu meeting with anything other than continued success going forward.

0 #1 Ran 2011-11-19 21:37
I like this one. You may laugh, a Chinese tea chain selling Chinese tea in China. But can you name any of its competitors? I will give it a shot. Its profitability is hard to overlook. Am I alone?
Quote
Refresh comments list
NextInsight.net

We have 2138 guests and no members online