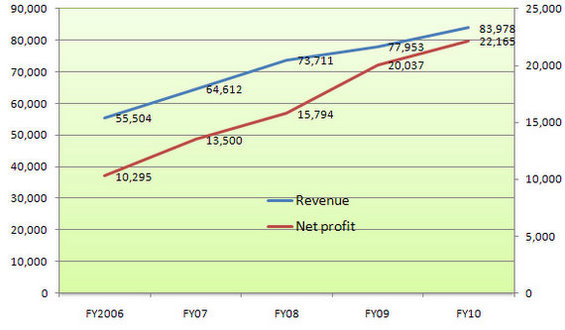 Vicom's steady growth in revenue and net profit have been accompanied by strong operating cash inflows and dividend payouts.

RECENTLY, I received a letter from the Land Transport Authority notifying me that it was time to send my car for inspection – the last visit being nearly 2 years ago.

It's time to cough up S$58 ($62 with GST) again for the inspection which will take no more than 15 minutes.

I found myself wondering how profitable Vicom, being the only listed vehicle inspection company, has been in recent years. How has the stock done?

The thing about its stock is, it’s ultra low-profile - no analyst regularly touts it. And it's illiquid as ComfortDelGro controls a chunk of it.

While Vicom is best known for its vehicle inspection services and 70% market share, its other services generate higher revenue.

It also does quality assurance testing, structural and chemical analysis, food and microbiological analysis, and environment monitoring, among others, for industries such as aerospace (eg, non‐destructive testing of aircraft components), marine and offshore, and oil and petrochemicals. Such non‐vehicular testing services accounted for 61% of FY10 revenue.

Vehicle testing and assessment accounted for 32%.

A beautiful sustained uptrend over 5 years of Vicom's stock price has led to Vicom shedding its small-cap status. It now has a market capitalisation of S$323 million.

When I finally found a Bloomberg chart for Vicom, I couldn’t believe my eyes. It is really beautiful – there is a gradual, relentless climb up without any ugly volatility.

It's the kind of capital appreciation that long-term value investors dream of.

It has been a 5-star performance for Vicom stock, despite being low profile and operating an unsexy business.

It is a steady climb that has defied the downturn of the global financial crisis, and the euro crisis in mid-2010 and currently.

This is possibly one of the few Singapore stocks that fit to a T the investment criteria of value investors -- it generates a lot of cash year in, year out, has zero debt, and requires low capital expenditure.

The sweet bottomline: it has truckloads of cash to pay as dividends. 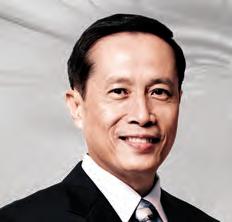 Vicom has been a highly predictable business, easy to understand – and generally speaking, a stable business. Even the top management, including CEO Heng Chye Kiou, has been with the company for a long time. Change is a description that is hard to attach to the business - even its HQ-cum-inspection centre in Sin Ming look the same as it has for decades.

If there is one investment criterion it doesn’t fulfill currently, it is that it does not appear to be tremendous value any more for investors to buy. The stock is trading at around 14 historical PE and 3.5X price-to-book at the current price. 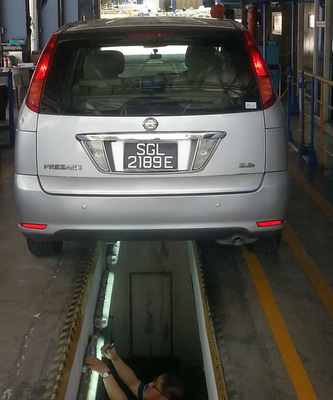 @ Vicom inspection: It costs $58 per car before 7% GST. Photo by Leong Chan TeikIn addition, at $3.70, the trailing dividend yield is 4.35%, which is not compelling. Many Reits and other blue-chips offer such a yield or more.

Of course, the yield would go up if Vicom earns more profits and ups the dividend payout ratio as well.

Profits could grow as COEs are in short supply and COE prices are at nose-bleed levels, which means the vehicle population is not being renewed as fast as before. As a result, there are lots and lots of vehicles needing to be sent for inspection regularly.

I, for one, will be adding S$58 to Vicom’s cash register soon -- quite reluctantly, considering that it makes fat profit margins which stood at an amazing 26% net last year.

Price and liquidity are not really correlated. As I said earlier if the co. profit/dividend /etc. keep on increasing, what seems fair/expensive now, will eventually becomes cheap. Moreover, we need to know the reason for the illiquidity i.e. it's all about supply & demand. Is it because there is no demand or there is lack of supply (existing shareholders are long-term investors). I believe it's the later.
Quote
0 #3 Driver 2011-07-16 14:24
This stock is a pretty illiquid stock - which means that, while its fundamentals are sound, it is not difficult for a small band of investors to push and push the price up.
Quote
0 #2 Miranda 2011-07-16 08:51
Hi PKC, I agree, Vicom could go higher. Are you vested? If yes, congrats! For those not vested, well, I would say wait for a pullback. Otherwise, it's not cheap to buy at this level - 14 historical PE and 3.5X price-to-book, dividend yield 4.35%.

Just my 2 cents worth
Quote
0 #1 PKC 2011-07-16 07:07
When it was a 2/3 bagger, people might also say that it couldn't possibly go higher, but look at it now. As long as the company keeps on generating higher profit, free cash flow, dividend, etc., the price will follow eventually
Quote
Refresh comments list
NextInsight.net