SEBASTIAN CHONG has crossed the finishing line of our Stock Challenge with a stunning 101.3% gain in his portfolio after six months.

During that period, the Straits Times Index (the benchmark index for the Singapore market) rose 14.8% only, in comparison.

Sebastian and three other participants started out with a hypothetical $100,000 capital to invest in Singapore stocks. To take part, the four put down $100 each in real money for the prize money.

The Stock Challenge will take a break until early next year. Readers who are experienced investors can indicate their interest in taking part by sending an email to This email address is being protected from spambots. You need JavaScript enabled to view it.

Meantime, read what Sebastian and the other participants have to say about their portfolios’ performance:

Sebastian Chong has invested actively in equities since the 1970s. He is managing director of Financial Info Analysis Pte Ltd, a company he founded after he retired as an accounting professor at the National University of Singapore. He now runs his popular investing website, www.shareowl.com

Yesterday, Nov 30, the STI closed at 2,732 which is 81 points or 3% above its level of 2,651 on Friday Oct 30. However, in November, we did not see a broad based increase in stock prices of SGX listed stocks. The rise in the STI was mainly attributable to the three bank stocks and a number of other blue chips.

Many small caps, especially S chips, fared worse as of end November than at end October. It looks like there has been minimal fresh buying by retail investors. The rise of the bank and other “liquid” blue chips could be the result of hedge funds borrowing in cheap USD at very low interest rates and investing in blue chips of the emerging economies.

These funds expect the USD to weaken further and hope to repay the loans in weaker USD after they take profit on emerging economy stocks. Under these circumstances, we should be cautious in our investing and stick to relatively defensive stocks that will also enjoy good earnings growth.

In this vein, I decided to take profit on a somewhat high risk technology stock, Anwell Technologies, a China manufacturer of DVD blank disks and a pioneer of thin film solar panels in China.

I bought 94,000 shares at 51 cents in October and sold them off at 67.5 cents on November 13. It turned out to be the right decision as it subsequently pulled back to close at just 60 cents on 30 November.

I used the sale proceeds to buy 310,000 shares of Tuan Sing Holdings at 20.5 cents. This hotel and real estate stock subsequently rose to 23 cents but in the current weak market for small cap stocks, it closed yesterday at 19.5 cents. (Indeed I took this opportunity to buy more shares for my real portfolio today at 19.5 cents.)

Tuan Sing has two five-star hotels in Australia (Grand Hyatt Melbourne and Hyatt Regency Perth). They should do very well especially from 2011 onwards when major renovation and refurbishment of all rooms are completed. The alteration works began recently. 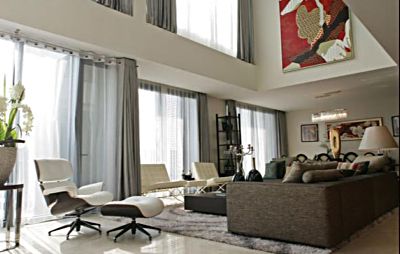 Tuan Sing's Lakeside Ville project in Shanghai sure looks upmarket. Photo: www.lakesideville3.comPhase III of Lakeside Ville, Tuan Sing’s residential development in Shanghai, was launched successfully this year and as of 30 September, they have been 50% sold.

Profit will continue to be recognised in the next several quarters on the sold units. As the outlook for the Shanghai property market looks good, Tuan Sing should not have any problem in selling the remaining units at higher prices.

Tuan Sing also has a residential property (cluster housing) development at Hinhede Road near the Bukit Timah Nature Reserve. It is called Mont Timah and comprises 32 units of 4,600 sq ft per unit. It will be launched towards the end of 2009 and TOP (Temporary Occupation Permit) is scheduled for 2011.

On 9 Nov, Tuan Sing announced the sale of Katong Mall for $247.55 million yielding a capital gain of $42.7 million. Considering that the property was acquired only last year, it was a quick and handsome profit.

The price/NTA at current price of 19.5 cents / 44.65 cents = 0.44 which is very attractive in view of Tuan Sing’s bright future earnings prospects. This ratio is conservatively stated since I did not take into account the unrealized profit on the Shanghai residential units that have been sold.

In 2009, Tuan Sing benefited from the appreciation of the Australian dollar. I believe the AUD will continue to be strong or even stronger in 2010 and 2011 since commodity prices are still on the uptrend.

Tuan Sing is under-researched and virtually not covered by securities houses. I certainly think this is a safe stock that will become a cash cow in thecoming quarters and years.

Apart from the switch from Anwell Technologies to Tuan Sing Holdings, I made no other changes to my portfolio in November as their medium- and long-term fundamentals remain strong.

Neontet is inclined towards high-growth small- and mid-cap stocks, preferring to stay away from most blue chips. He has had a good time investing in small- and mid-caps despite being burnt by some S-chips and Singapore companies with corrupt management.

The Stock Challenge may have ended with my portfolio gaining a highly satisfactory 42.1% but the business growth of the three core stocks – Oceanus, Sinotel and Techcomp – continue its upward trajectory.

Oceanus: It is on the verge of listing its shares through Taiwan Depository Receipts on the Taiwan Stock Exchange. Chances are, this move will spur a higher valuation for the Oceanus shares on the Singapore Exchange. Another positive development is the spike up in abalalone prices in China. From what I read, the jump is as much as 100% - if not, certainly above 50%. Based on what I read, Oceanus plans to capitalise on this by selling more of its stock of abalones.

By the way, Oceanus has gained a higher profile in Singapore through the opening of its abalone restaurant at Orchard Central. Try the food there!

Sinotel: Here too, a foreign listing of shares will boost the stock price in Singapore. After a lengthy process, Sinotel seems to be on the verge of attracting US fund managers to buy its ADRs.

In its business, Sinotel is expected to continue to enjoy a boom in its industry, and the full-blown effect can be increasingly seen in its profit and loss statements. Its recent Q3 profit was a hefty 52% jump year-on-year.

Techcomp: No recent news from the company, but it announced a few months back that it had record revenue and profit for 1H. Will its second half deliver good numbers? We are just a month away from the end of the year, and I believe the company will not disappoint. Techcomp has frequently said it’s a stable, predictable and growing business.

* Arbitrary 50% discount applied to Celestial shares, which are suspended

Shuishui, who is in his mid-30s, has been a stock investor for many years. A Singaporean, he has close ties with China as his parents and relatives are living there. He has taught himself how to analyse financial statements.

Level 13 is a 31-year-old investor and a business analyst with 4 years of investing experience. Check out his blog for insights on financial matters (mainly equities).

In this last month of stock challenge, I shorted more of DBS at $14.12 and then closed out all my position at $14.78. The run-up in price was just too much.

To sum up, in the last 6 months, my portfolio made a loss of 2.69%. Most of the losses can be attributed to the put warrants and the shorting of DBS shares. But if anything, the events happening in Dubai for the past few days are telling us that this credit crunch is not over yet. Not by a long shot.

Two weeks ago, I bought into a low volume stock called San Teh. It is currently in a sweet spot to ride on China's construction and infrastructure boom. The catalysts for its share price appreciation are slowly appearing.

Catalyst 1:
Demand for cement remains strong due to the re-construction after the Sichuan earthquake and China's infrastructure stimulus spending. So far the cement prices around different regions in China have held up well.

Strict restrictions on new cement projects and cement production are being enforced by various levels of the Chinese government. Provinces with a per capita cement clinker capacity over 1,000 kg are reportedly unable to build a new production line. Furthermore, provinces with a new dry process cement percentage exceeding 70% are to limit production capacity to 10% of the respective province's cement output during the previous year.

China's cement production overcapacity is approximately 300 million tons; with over 3,000 small vertical kiln factories having a production capacity of 100,000 tons. The price ratio between iron and steel and cement products in China reportedly eclipses to 20:1 – a stark contrast to the 3:1 international ratio. According to China Cement, the backward capacity is due mainly to the profit margin achieved from low costs and low-level technology; aggravated by rapid expansion and outdated production capacity.

Catalyst 3:
The price of coal, which is a major cost of cement production, has remained at reasonably low levels since the crash in commodity price last year. A great amount of costs can be saved in the near future when the cement factory successfully switched to using residual heat for the power generation plant.

For past reports on the Stock Challenge, go to our Archives here.

We have 1410 guests and no members online