From Beijing to Canada to S'pore: Making an impact 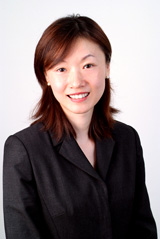 Born and raised in Beijing, studied in Canada and now works in Singapore

KATHY ZHANG CHENGSHUANG, 36, speaks articulately. She often speaks rapidly too, as though her speech is frantically catching up with the ideas flashing through her mind.

It is thus hard to imagine that some years ago she was tongue-tied - much to her embarrassment - when questioned by an immigration officer after she landed in Canada for her undergraduate studies.

“Maybe I was too nervous and too excited. I couldn’t understand a single word he was saying in English,” she remembers. “It was a huge embarrassment for me.”

And to think she had done brilliantly in English exams such as TOEFL in Beijing, her hometown.

That immigration episode aside, success in various fields marked her growing-up years. Her early models of success were her parents. Dad was an engineering professor in Qinghua University, while mum was a mathematics professor in Beijing University. They doted on her, their only daughter and their second child, hiring two maids for her.

Encouraged to do well in her studies, she was always in the top 5 per cent throughout her school years, says Kathy. Not only that, she represented her school and, later, her university in sports such as swimming and running.

Sports inculcated in her the habit of establishing goals and working towards them. “I have made it a point to not fail. Through sports, I learnt early the value of persistence and stamina – which became especially important later to me when I ventured into business.”

Her parents, who had taught overseas on various stints, decided that Kathy would benefit from an overseas education. After the third year of a pharmacy course in Beijing University, Kathy applied and was offered a place in the University of Calgary, where her dad had a close friend who was a dean.

Kathy remembers: “It was a rare opportunity. At that time, there were only four undergraduates from mainland China in that university.” 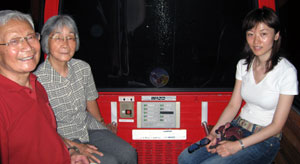 Kathy's parents handed her US$8,000 in a specially sewn pouch before she flew off for her studies in Canada.

With US$8,000 in a specially sewn pouch, she bade goodbye to her parents and flew to Calgary. She recognized that her parents had saved up the princely sum – princely in Communist China - with great effort, and she resolved not to ask for a single cent from them in future. She would instead rely on her enterprise for her future financial needs.

Self-sufficient she may have been determined to be, but she was not prepared for the misery of being away from her family. Neither was she prepared for the culture shock of a liberal Western lifestyle that was a sharp contrast to her upbringing.

“Two weeks into my course, I called my father at midnight. I told him I wanted to quit!”

Of course, Dad helped restore some sense in her. She reluctantly stayed on and over time, she learnt an important life lesson: Don’t be shy to ask for help.

When she turned to lecturers and friends, she found help that enabled her to overcome various challenges. Kathy graduated with a Bachelor of Science degree in Chemistry with distinction and a Grade Point Average of 3.77 out of 4.

“I found new confidence in myself. I realized that anything is possible, if I ask for help and don’t give up in my own efforts,” she says. At a career fair on campus, she was recruited by the Economic Development Board of Singapore.

“I was attracted by the images of swaying palm trees and an island closer to China, and the idea of working and living in a vibrant economy,” she says.

Arriving in Singapore in 1995, Kathy did research at the Singapore Institute of Standards and Industrial Research, which was then under the purview of the Ministry of Trade and Industry.

Just after eight months, a succession of jobs quickly followed as she sought to widen her experience and prospects. “I always asked myself: ‘What’s next?’ Maybe it’s because I’m from China and here on my own. I do plan. I can’t relax and be complacent.”

First, she crossed over to Rhone Poulenc, a French chemical and pharmaceutical company. From her base in Singapore, she did research as well as travel to Japan, South Korea, China and India to provide technical service to clients.

She hit on the idea of enrolling in a distance-learning MBA course. She didn’t have at least five years of working experience but what the heck, she applied anyway to the Golden Gate University, California. She was rejected.

She tried again the following year, even though she had chalked up only slightly more than three years of working experience by then. Not one to give up easily, she persistently called the principal of the local programme.

“Larry became sympathetic and wrote a letter to higher-ups in California,” she remembers. “And soon I was accepted.”

Her course mates were the likes of senior vice-presidents and country general managers sponsored by employers such as Microsoft, IBM, and Hyatt. Kathy paid her own way – about $18,000.

In the midst of her course, she moved to a new job at Genecor, a Nasdaq-listed biotechnology company, as technical service manager. Being a new set-up in Singapore overseeing Asia Pacific, it encountered various challenges but Kathy was brimming with ideas for tackling them.

A challenge which she identified was that Genecor did not have a budget to set up a laboratory in Singapore, so customer trial samples were sent to Holland for testing, which resulted in delays in orders from clients.

Together with Curtis Montgomery, Kathy founded WallStraits.com in 1998.

She knocked on many doors at the National University of Singapore before I found Dr. Heng in the Department of Pharmacy who let us use his laboratory facilities without paying rental. In exchange, we gave him products for his students’ projects."

When 1998 came around, the dawn of the dotcom era inspired her and a friend, Curtis Montgomery, to start a website as a hobby, WallStraits.com

It was modeled after the Motley Fool of the US and sought to teach investing to subscribers using Warren Buffett’s principles of fundamental investing. Kathy learnt Web design on her own.

They started investing in shares of Singapore-listed companies such as Omni Mold and Unisteel, interviewed the management and wrote reports on their company visits. Within months, the venture was transformed into something serious.

Kathy remembers: “All those years I was an employee, I was eager to make an impact. Now, I had an even greater opportunity.” She and Curtis left their jobs to develop WallStraits.com from a small office in Riverside Point, paying $1,000 a month in rent.

“At that time, people weren’t too concerned about money. It was cool to wear jeans and T-shirts to work and we were excited about the Internet. We were able to recruit several very talented financial writers.”

A former business associate, Dr Ng Cher Yew, took a 15 per cent stake in WallStraits as a seed investor. Kathy sent e-mails to 50 venture capitalists, one of which was Internet Media House Asia, whose CEO, Mr Frank Lavin, subsequently invested $1 million of the company’s money. (Mr Lavin became US Ambassador to Singapore in 2001.) 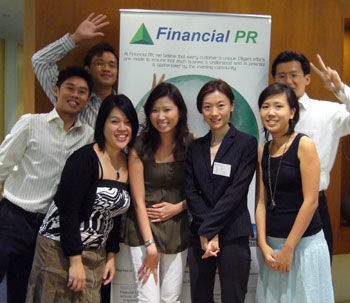 Kathy and her team which organised the 2007 Hong Kong Corporate Day, an investor conference.

Impressed by Kathy’s dynamism, SBI E2-Capital, a corporate advisory firm, offered to start an investor relations joint venture with WallStraits in 2001. That start-up was called Financial PR, and Kathy became its managing director.

“I gave myself two years to learn this field. Along the way, someone suggested what he thought was a brilliant idea: hire a bunch of pretty girls and get them to be nice to analysts, bankers, etc, who are mostly guys.”

Kathy was instead repulsed by the idea. “I came from a science background. I’ve always been particular about substance. I don’t want to do something superficial or rah-rah. I want to provide real value to my clients.”

She was also determined that Financial PR attract clients on its own merits. Just a year later, SBI – which had referred its IPO clients to Financial PR - left the joint venture, to Kathy’s dismay.

“My instinct to survive became even stronger. I was aggressive in clinching IPO clients. I was known in the industry for being aggressive,” she remembers with a chuckle.Sometime in 2004, the year that Financial PR helped launch 12 IPOs, Kathy began to develop the company’s brand of  “strategic investor relations”. 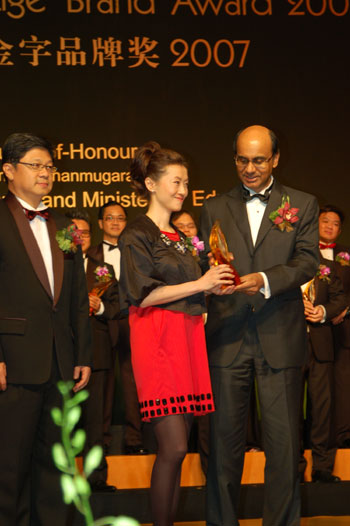 As Financial PR grew, it attracted talented staff, one of whom is Mark Lee who rapidly rose from being an associate to deputy managing director and shareholder. Mark's commitment, dynamism and talents are well-recognised in some parts of the investment community.

Today, Financial PR has more thant 60 clients on a retainer basis, making it the biggest player in investor relations in Singapore. Not only that, its brand and know-how was franchised in Kuala Lumpur and Hong Kong where it has two sister companies.

Even as Kathy – who owns a condominium unit a short walk from her office in Robinson Road - has achieved high net-worth status, some things about her have not changed.

“I still can’t bring myself to spend more than $100 on a dress. And I still own only one handbag – an Elle,” she says. “On my shoe rack you will find just two pairs of working shoes.”

There’s also a pair of sports shoes for running in the gym and another one for a game of tennis, which she has recently picked up in order to have a more balanced lifestyle now that the business enjoys strong, regular cashflow.

Aside from being the kind of entrepreneur whom Singapore welcomes – by creating a thriving business that employs Singaporeans – she gives to friends and colleagues on a personal level. (Kathy, by the way, has taken up Singapore citizenship).

When she learnt that a young colleague less than a year into his job was striving for CFA certification, Kathy paid $1,200 for his exam fee.

She gave without any strings attached.  When he left the company shortly later, she wished him well and considered the $1,200 as a token of appreciation.

Reaching out because we want to invite you to be our partner, as we believe you are an excellent fit for our brand. And we'd like to add value to your business&audien ce.

moomoo is a powerful investing app that offers commission free stock trading, powered by comprehensive professional-gr ade tools, real-time data, and fully integrated social functionalities . Investment products and services are offered by Moomoo Financial Singapore Pte. Ltd. ,which is regulated by the Monetary Authority of Singapore (MAS). moomoo SG is a subsidiary of FUTU. One of our key-strategic investors is Tencent & in March 2019, FUTU was listed on Nasdaq. Know more of us:[https://www.moomoo.com/sg]

We have 1497 guests and no members online