The Value in Suntec REIT, the Upside from $400m of Asset Enhancement Initiatives

This article was recently published on Calvin Yeo's blog, www.investinpassiveincome.com, and is reproduced with permission. 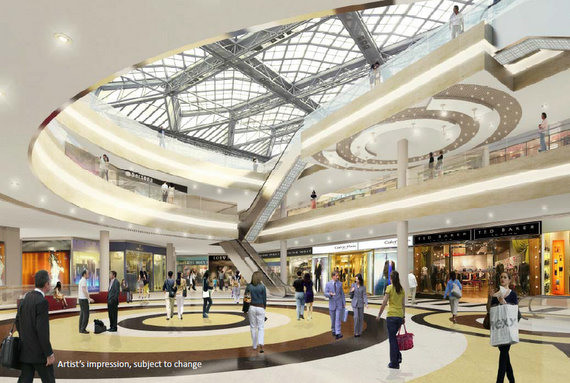 The remaking of Suntec City will introduce sky gardens and new atriums, among other things.

RECENTLY, THE price of Suntec REIT units dropped dramatically - from the $1.50 level in August 2011 to close at $1.175 last Friday - and is one of the poorer performers among commercial REITs.

As a result, Suntec REIT is currently trading at a whopping 35% discount to its Net Asset Value (NAV)! Why has it fallen out of favour with investors?

Suntec City Mall and Convention Center which makes up approximately 80% of the asset base is more than 10 years old. It’s one of those places I used to hang out at when I was a student.

I remember the days when lots of people would queue up to go into the fountain area and touch the water and take photographs. Now, it is no longer the hip destination it once was.

There are many other new cool spots to replace it such as ION Orchard and Vivocity.

I thought it's about time they did something about Suntec! So they did, with an announcement of a $410 million makeover.

The project which will take place from mid-2012 to 2015 will increase the net lettable area for retail by 14%, increasing Distribution Per Unit income from the retail segment.

Newer, hipper tenants will be introduced, and more F&B and watering holes which will definitely be more attractive.

Overall stabilized rentals are projected to increase by 25%. Best of all, the capital expenditures on the Asset Enhancement Initiatives (AEIs) will be supported by the proceeds from the sale of CHIJMES and from borrowings, with no equity raising expected.

We have all seen how AEIs conducted by CapitaMall Trust and Fraser Centerpoint Trust can revitalize malls and boost rental DPU, I expect no less from Suntec REIT. 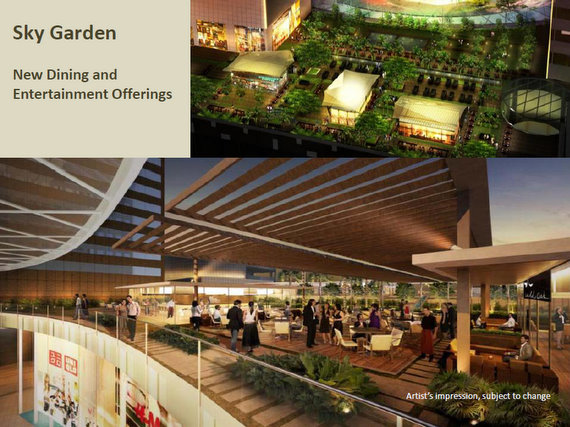 Suntec REIT is currently managed by listed company ARA Asset Management, which is also the manager of other REITs such as Prospertiy REIT, Fortune REIT, Cache Logistics Trust and more.

ARA is established and was recently named one of  “Asia’s 200 Best Under A Billion” by Forbes Asia in September 2011. It is an affiliate of Cheung Kong (Li Ka Shing).

As I pointed out earlier, Suntec REIT is trading at a deep discount of 35% to NAV. Its dividend yield of close to 7% is very high for a retail/office REIT in Singapore, compared to CMT at 5.4%, FCT at 5.6%, MCT at approx. 6%.

Occupancy is very high for both retail and office, exceeding 97%; which is better than most of the other grade A offices. While average passing rents for Suntec City has only increased slightly over the past few years, the AEI will provide a significant upgrade to rent.

Suntec City is now served by the newly opened Circle Line which will bring more and more traffic to a more easily accessible Suntec City as compared to last time where one had to walk a long distance from City Hall MRT.

Its proximity to new developments at Esplanade, Marina Bay Sands and Marina Bay Financial Center will also boost the profile for Suntec City. When fully developed, Suntec City will be a part of a new vibrant shopping, financial hub at Marina Bay.

I initiated a long position on Suntec REIT last week at $1.155, confident of the future prospects of the REIT. While it depends on how effective the AEIs are, I believe that ARA will do a good job.

While Marina Bay Sands has a new Expo center, Suntec Expo can still cater to the smaller and niche Expos. It will be a long wait until at least 2013 to see results from the AEI, but I think current valuations already look rather attractive to include Suntec as a small part of my Singapore Stock Portfolio.

ARA ASSET: How its private real estate fund is unlike an equity fund manager

Calvin Yeo spent the last 5 years researching and perfecting his passive income tools. He is in the process of setting up his family and realizes that it’s not enough to just provide for the family. You need to have time to spend with your family, especially children as they grow up. He has examined his own life and knew he had to take action now to invest for his future and his dreams.

Calvin graduated with a Business Major in Finance and Accounting and spent a few years working in an investment bank. The knowledge from his studies and working experience serve as a good base for him to grasp the ideas for passive income generation.

0 #4 Calvin 2011-12-11 09:43
Hi shortist, I believe the AEIs will be carried out in phases and measures will be put in place so as to lessen disruption to the current office tenants, retail tenants and mall traffic. In fact, I have seen AEIs being carried out by many of the retail REIT owners like Fraser Centerpoint Trust, CapitalMall Trust, Starhill Global, they have had generally very little impact on the property other than the portion which is currently being upgraded. Your view is overblown and I do not expect MNC tenants to move out just because of this. Valuations will be upgraded post AEIs, so good luck waiting for Burma price.

Calvin
http://www.investinpassiveincome.com
Quote
0 #3 shortist 2011-12-06 09:43
If I am ceo of a MNC tenant in suntec , I would move out immediately to better space as the pollution from the 400 million dollar of dusts would be detrimental to my office stuff health and performance.

Expect suntec to sign on new tenants at the bottom of the rental market and to people from countries like china and burma and india where health is not so much of a concern.

This imply suntec shoudl be value at burma price.

this is dead money untill 2020 !!
Quote
0 #2 Calvin Yeo 2011-11-28 17:35
Yes, the potential downside risks are not unfounded. With regards to retail, my personal opinion is that it will do ok with all the new developments around Suntec and as the Circle Line matures, it will bring significant traffic to Suntec.

The risks are definite with office rental, however, the passing rents are lower than most other grade A offices in the CBD area, so there is an advantage over the more expensive and newer office. I wouldn't place too much emphasis on the convention center as it pales in comparison to the new Marina Bay convention center. Hopefully, the AEIs can do much to rejuvenate the area.

http://www.investinpassiveincome.com
Quote
0 #1 Woh 2011-11-28 05:29
Suntec trades at attractive yields of 7.8% for FY12... but there are potential downside risks. Credit Suisse has an underperform rating on Suntec cos:

(1) the continuing disappointment in retail division; (2) the risk of falling rents and occupancies at its (older) offices; and (3) lower earnings from convention centre.
Quote
Refresh comments list
NextInsight.net

We have 932 guests and 7 members online