ROBERT STONE: "My experience with S-Chips & Chinese listcos - The good, the bad & the ugly"

Robert Stone, one of the most successful investors in Singapore, took some persuading but in the end, he agreed to share here his unprofitable experience with S-chips and some lessons gleaned. Turns out, thankfully, he also has a whopper of a winner in a HK-listco called Dawnrays Pharmaceutical. (For his past articles, see the links at the bottom of the page.) 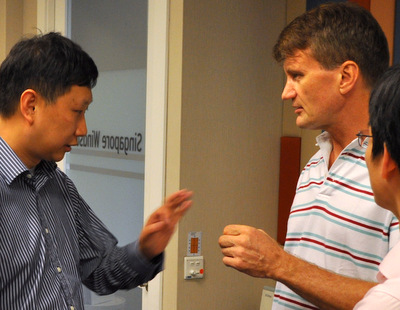 Robert Stone (right) speaking with Anwell chairman Franky Fan at the company's AGM in 2011. Robert has written down to zero his S$2.375 m investment in his current stake in Anwell. NextInsight file photoI STARTED buying S-Chips in 2008.

After 6 years, none of the companies I invested in have done exceptionally well.

One I have written down to zero (Anwell Technologies, which I had invested S$2.375 million in for my current stake) and another, Sunmart, remains suspended from trading.

All these companies have since done poorly both in terms of their businesses and their share prices.

I sold out of Singapore Windsor at a small loss which I was happy to accept as the business was facing real headwinds.

Since the business was taken over by new management, the share price has done very well although the business hasn't changed as yet.

I have no regrets as the buyer may not have wanted to proceed with the offer without my agreement to sell my holdings which amounted to a 14% stake in the company.

There are only two companies that I have held for some time that I feel relatively optimistic about -- Dutech and China Sunsine.

Both companies have been hit by an increase in costs and the resultant drop in profitability that many companies in China have faced in the last few years. I am reasonably confident that the management of both companies are honest and competent.

My experience with S-Chips has mostly been a confirmation of what I already believed. It is most important that the management of companies are honest and competent.

With the exception of Suneast, companies in which I had doubts and subsequently sold I managed to avoid losses.

With Suneast, I made a big mistake as by the time I had serious concerns about the management, the share price had already taken a major hit.

The situation with Anwell is as yet unclear. Both the CEO and CFO are under detention in Dongguan.

When and if the full story is publicly revealed, I will be surprised if there is any personal misappropriation of company funds by either one of them. I have a theory on what has happened but I think it is realistic to expect the worst for Anwell shareholders.

Of the companies I sold at a modest profit, one of them did not pay a dividend when I felt it easily had sufficient cash and earnings to support a substantial one.

At the AGM, I raised the question and, while not satisfied by the answer, was willing to accept the response that the money was needed to develop the business further.

After the meeting I was approached by a beautiful young woman from China who spoke very good English. She said she was the CEO's personal assistant.

We were having a discussion when the CEO who was nearby observed us and barked angrily at her. She turned white and disappeared without even excusing herself.

It was clear what the real situation was and I felt the CEO had revealed his true colors with his display of boorishness. I didn't want to trust my money with such a character and proceeded to unload my shareholdings.

If I hadn't attended that AGM and observed the CEO in action, I would have lost 80% of that investment by now.

Many of the S-Chip scandals and meltdowns of recent times have also reinforced my skepticism on the usefulness of audits on such firms.

Some level of confidence in the management is more important to me than the assurance of a team of young accountants from Singapore spending a week perusing the books of the Chinese subsidiaries of S-Chips.

The 'lie detector' test that I think is important is the payment of dividends. If the management is concerned with the interests of its shareholders and has the ability to pay dividends but doesn't, it should be a red flag.

I have long held the view that companies in some Asian countries -- in my experience, primarily Vietnam and Thailand -- with female CEOs perform better than those run by men.

In Vietnam especially, I have observed this, so I was interested to read a recent Bloomberg report backing this theory with some evidence.

My data on this phenomenon in China is limited as the CEOs of all the S-Chips I have invested in are men.

Interestingly, the Founder and Chairman of my largest Chinese investment, HK-listed Dawnrays Pharmaceutical, is a woman.

From 2004 (a year after Dawnrays' IPO) to 2009, Robert Stone steadily bought the stock, which didn't move much. But in 2009, it doubled in price. Today, it has become a multi-bagger such that the unrealised gain on his holding of Dawnrays is about 13X his realised and unrealised losses on his investments in S-chips. The stock traded recently at HK$5.58, flirting with a record high, and a trailing PE of 24X. Chart: Yahoo Finance

Dawnrays has been an exceptional investment for me: To date, the unrealised gain on this stock is about 13X the realized and unrealized losses on my S-Chip investments.

I now own 33 m shares of Dawnrays, which is a 4% stake in the company.

Understandably, there is much negativity among investors towards S-Chips.

It is a painful experience when you lose everything or most of what you have invested in a company, particularly where there is fraud or some other wrongdoing involved.

My experience with S-Chips has been mixed and, as yet, not successful.

However, I think there is good value in some of them and I don't intend to give up due to the bad experience with a few. 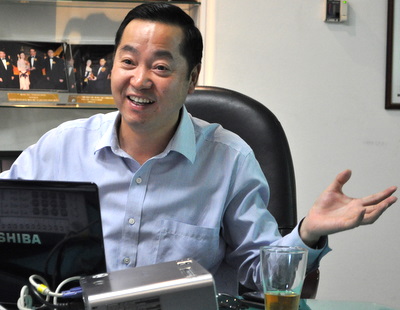 Dr Guo Hong Xin, executive chairman of Sunpower, owns a 23.2% direct interest in the company and is its single largest shareholder. NextInsight file photo I recently bought some shares of Sunpower, which I hope will benefit from the obvious need to clean up the environment in China.

Time will tell whether I am just a sucker for punishment or a real contrarian.

For some time, I have been less concerned about individual companies in China than the economic and political situation in China.

Whether the leadership is able to push through the necessary reforms to restructure the economy is still uncertain. In addition, I wonder how sustainable the current political system can be as the populace becomes wealthier and demands more accountability from their leaders.

SUNMART: 'Why I became a substantial shareholder'

ANWELL: "My take on its solar biz prospects"

ROBERT STONE reaping the rewards of 3 decades of investing

+1 #5 sykn 2014-04-21 08:45
Thanks for the balanced view. I too have 7 S-chips in my portfolio and none of them has done well, with one counter suspended (Eratat). But I have not given up on S-chips yet as the potential is huge, and I am improving my skills to invest more intelligently and carefully on this category of businesses.
Quote
+1 #4 Kerrick 2014-04-07 23:53
I bought into Reyphon (Suntar Eco-City) recently after seeing its new direction into BOT model for eco-city which china really needs for healthy living. Green tech, water mgt, new energy mgt etc are key features. Looks good moving forward!
Quote
+1 #3 1.618 2014-04-06 21:59
Eratat also give good dividends, >4% and got suspended.
Quote
0 #2 KHiang 2014-04-06 18:33
To balance things, there were a no. of s-chips that have done very well for investors: China Animal Healthcare, HanKore, United Envirotech, and more recently XinRen and SunVic Chemical.
Quote
0 #1 tan keng sooi 2014-04-06 15:55
Great teaching for all S-chip investors. Thanks Robert.
Quote
Refresh comments list
NextInsight.net

We have 270 guests and no members online