ARMARDA: Analysts & investors test its satphone service out at sea

Click on the 55-second video above for glimpses of a trip out to sea with Armarda Group CEO to test satellite phones and Armarda's mobile satellite service.

(For higher resolution, click to start the video, then move your mouse cursor over the base of the video, and click on 'Change Quality'.) 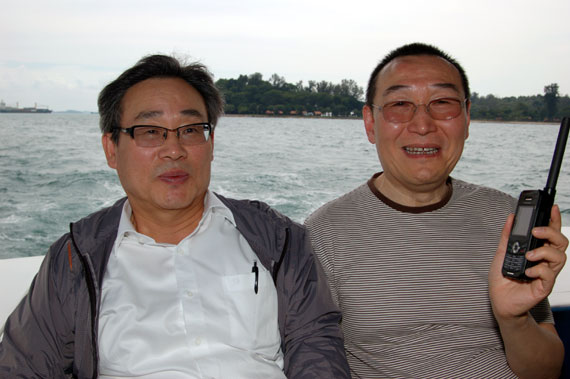 Dr Ryoo Jang-Soo (left), the CEO of South Korean satellite mobile phone manufacturer, is working closely with Armarda CEO Terence Luk (right) to roll out an exciting pipeline of products and services for the Satphone market. 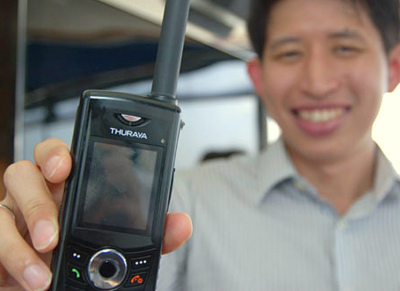 NRA Capital analyst Joel Ng is pleased with the performance of the Thuraya XT satellite phone out at sea.

WITH ONE MILLION fishing boats, the PRC maritime industry is the largest target market for the mobile satellite phone (satphone) service that Armarda Group is tying up with China Telecom to provide.

At sea, telecommunications signals for cellular phones on GSM or CDMA networks become unreliable as phone users move away from the receptor broadcasting towers onshore.

The alternative is satellite phones (satphones, in short) which send and receive calls using satellites that orbit in outer space. 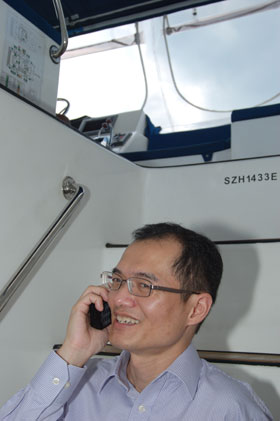 On a yacht out at sea, UOB Kayhian analyst Jonathan Koh uses the mobile satellite service to enjoy a crystal clear phone conversation with a colleague in his Newton office on Singapore.

Singapore-listed Armarda recently invited a group of analysts and investors to test the robustness of its satphone service at sea off Singapore.

Dr Ryoo Jang-Soo, chief of the South Korean third-party original equipment manufacturer for the Thuraya satellite phones and equipment, specially flew to Singapore for the demonstration and addressed technical queries posed by investors on the cruise.

From Sentosa Cove, we were ferried about 6.5 km in a yacht southward of Singapore.

The tests by China Telecom were part of its rollout of a mobile Satphone service with phone line prefix +1349 on Thuraya's satellite network.

Aside from the size of the maritime industry in China that could ring in strong revenue growth, Armarda is confident of a good take-up rate because the cost of using satellite phone services is affordable. 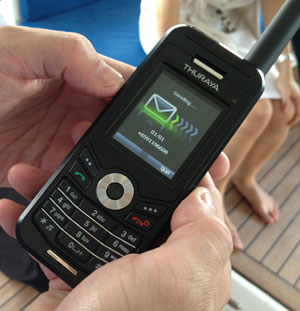 Miles out at sea, UOB Kayhian analyst Jonathan Koh successfully sends an SMS to a Singapore number with prefix +65 using the Thuraya XT. 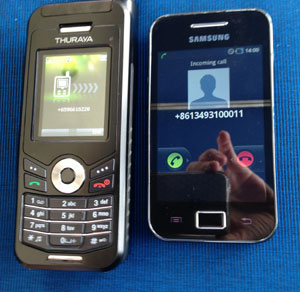 Samsung phone (right) receives a call from a line with +1349 prefix. The caller's dual-SIM Thuraya XT-Dual phone (left) had automatically selected the satellite mobile network over GSM out at sea.

We have 261 guests and no members online