INITIAL SHIPMENTS of Trek 2000 International’s ground-breaking FluCard and Ai-Ball have reached stores in Japan during this quarter. And a licensing agreement between Trek and Toshiba Corporation is being hammered that will see the Japanese company manufacturing the FluCard from early next year.

Trek is not just banking on revenue from the hardware and licensing but also from the apps. 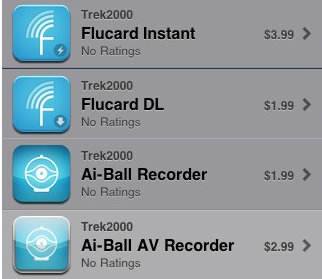 Screenshots of 4 of Trek's self-developed apps for its FluCard and Ai-Ball.

Trek has developed a number of apps, and continues to develop more, for the FluCard and Ai-Ball.

By the end of this year, Trek would have developed more than 40 apps, said Mr Henn Tan, CEO of Trek, at a 1H results briefing on Tuesday.

Trek has begun to sell these apps for a few dollars per download (see screenshots on the right).

The apps enable the FluCard to have a wider variety of features, although the wi-fi-enabled card on its own is sufficient for its key role – which is to enable users to transmit photos from their cameras to other FluCard-equipped cameras and to devices such as smart phones and PCs.

In other words, the FluCard, essentially a wi-fi-enabled SD card, doesn’t require any software for it to work – it’s an insert-and-play device.

In Japan, the FluCard is being distributed by Kaga Electronics, which has projected sales of US$2 m and US$8 m this year and next year, respectively.

The FluCard is set to become the defacto standard of SD cards, said Mr Tan.

This is because two of the three founders of the SD Association – Toshiba and Panasonic – have endorsed the FluCard.

Panasonic and Trek are co-chairing a forum which seeks to set a base protocol for major digital camera makers to produce cameras that can use the FluCard with ease.

In October, the SD Association will have its annual meeting in Bangkok where it will announce the specifications for the FluCard so manufacturers of devices that host SD cards can tweak their firmware.

Toshiba, which has about 45% of the global market share of SD cards, expects the FluCard to account for 25-30% of the market by Year 3, said Mr Tan.

The market potential of the FluCard is massive, considering that the number of new digital cameras produced a year is more than 100 million.

Trek envisages that the FluCard will have far wider uses beyond the camera: The FluCard could, for example, be used to enable photos to be transmitted directly from cameras to projectors, TV screens and printers. 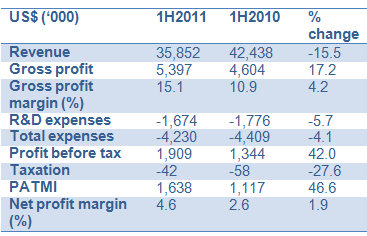 Mr Tan shared an exciting application of the FluCard which is being commercialized.

Incorporated into an electronic white board, the FluCard can wirelessly transmit content from the board to participants at a meeting, who can also edit the content and relay it back to the white board.

Next month (Sept), Trek will hold a seminar in Tokyo to open up its software development kits so developers can write apps for the FluCard.

“The more apps there are, the greater the enjoyment of the FluCard by the user – so it goes beyond storage and it expands the usage,” said Mr Poo Teng Pin, director of R&D at Trek.

There would be apps also which are payable for using the FluCard with TV screens, projectors, etc.

Strategically, the proliferation of apps will limit the viability of the clones that will inevitably be produced, since the apps cannot work in clones. "It’s just like the iPhone – clones cannot download the apps created for the iPhone," said Mr Tan.

This year, expected US$6.4 m. Only thing is now there is not much visibility. Can only imagine the FluCard selling in Japan...

We have 1379 guests and no members online